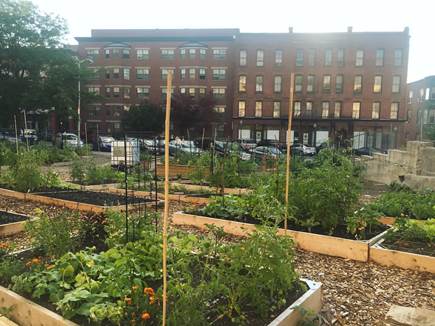 MassDevelopment and Clinton’s Growing Places Garden Project today announced a new campaign through the civic crowdfunding platform Patronicity and the Commonwealth Places initiative. The campaign will help fund the final phase of the Maybarton Community Garden project, which launched in 2015 when Clinton residents transformed an empty lot in the downtown into a beautiful community garden. The funds will expand the garden with public art, signage to educate visitors, space for community events and fitness classes, a compost system, storage, and seating.

“This public garden will provide Clinton residents with a vibrant space in which to enjoy their natural environment and engage with their fellow community members,” said MassDevelopment Vice President of Real Estate Services Amanda Maher. “MassDevelopment is pleased to help the Maybarton Community Garden expand with new seating, storage, and programming through this Commonwealth Places campaign.”

If the campaign reaches its crowdfunding goal of $5,000 by October 6, 2017, at midnight, the project will win a matching grant with funds from MassDevelopment’s Commonwealth Places program. Learn more and donate www.patronicity.com/clinton.

“A community garden might look like it’s just a garden, but it’s so much more than that to everyone who gets to experience it,” said Nicole Melone, Co-founder of the Maybarton Community Garden. “A community garden is a place where people grow their food and connect with other members of the community in the space.”