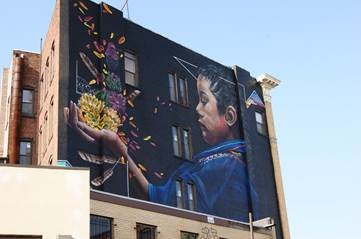 MassDevelopment and the civic crowdfunding platform Patronicity have launched a new Commonwealth Places campaign for Beyond Walls, an organization that made a major splash in downtown Lynn with a summer 2017 mural festival and other significant art and lighting installations. Beyond Walls is dedicated to activating underused space to strengthen communities and is sponsored by Lynn’s Neighborhood Development Associates Inc., a nonprofit formed to transform targeted neighborhoods in Lynn’s urban core.

The campaign will raise funds for Beyond Walls’ second mural festival, slated for summer 2018. In 2017, Beyond Walls brought 23 artists and several artist assistants from Lynn and around the world to leave their stamp on the city. Their work created a downtown economic boom with more than 5,000 festival visitors flocking to Lynn, where attendees spent money in local restaurants and business. The festival generated significant buzz, earning more than 75 press mentions and more than 4.5 million impressions on social media. With this campaign’s support, Beyond Walls plans to build on its momentum from the 2017 projects, bringing more large-scale works of art, mixed media art installations, restoration of many of the city’s “ghost signs,” and a bolstered calendar of programming to the city’s urban core.

“The first Beyond Walls campaign transformed blank walls into vibrant works of art that are accessible to residents and visitors of all backgrounds, successfully shifting the conversation about Lynn’s future and changing perceptions of what is possible,” said MassDevelopment President and CEO Lauren Liss. “We look forward to seeing what the next chapter of Beyond Walls brings to Lynn.”

If the campaign reaches its crowdfunding goal of $50,000 by May 31 at midnight, the project will win a matching grant with funds from MassDevelopment’s Commonwealth Places program. Learn more and donate at patronicity.com/BeyondWalls.

“Since 2016, Beyond Walls has worked to address many of the challenges residents and business leaders shared they were facing in downtown Lynn. Our initiatives help to create a safe, colorful and vibrant downtown for the City,” said Al Wilson, Founder and Executive Director of Beyond Walls. “Our 2018 mural festival will build on the great momentum of last years mural festival and our underpass and neon lighting installations.”