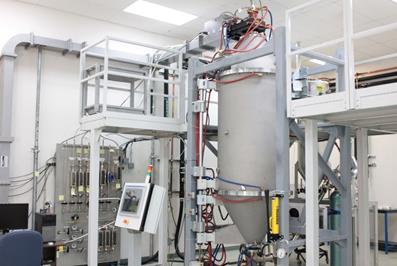 MassDevelopment has provided a $2 million Emerging Technology Fund loan to Amastan Technologies LLC, a North Andover company that commercializes advanced clean production technologies for next-generation materials. Amastan will use loan proceeds to buy equipment, make improvements to existing systems, and add automation and safety features to pilot equipment, which will allow the company to scale up its production process.

“The Emerging Technology Fund is designed to help growing companies find the capital they need to ramp up production, upgrade systems, and reach a wide range of clients and customers,” said MassDevelopment President and CEO Lauren Liss. “This loan will allow Amastan to do just that, and will help the company better serve defense, transportation, and energy initiatives throughout the state.”

Amastan Technologies was founded in 2010 and is headquartered in a 17,000-square-foot facility in North Andover. Its technology was born out of discoveries made at the Massachusetts Institute of Technology and the University of Connecticut Innovation Labs, and is led by experienced entrepreneurs, plasma engineers, and investment professionals. Amastan is commercializing the world’s only high-power microwave plasma technology poised to disrupt traditional chemical and solid-state processes for production of advanced materials, removing up to 90 percent of the process cost and byproduct waste, by replacing batch-process methods with clean, high yield, continuous, and high purity plasma processes. Amastan is funded through a combination of government research and development grants, commercial programs, and equity investment from leading venture firms.

“We found that MassDevelopment is a tremendous resource for companies based in the Commonwealth,” said Dr. Aaron Bent, Chief Executive Officer of Amastan Technologies. “Their team worked with us to create a financial instrument tailored for our needs. We will leverage this funding with equity capital to further invest in hiring key talent, and accelerate several of our commercial programs.”

MassDevelopment’s Emerging Technology Fund (ETF) helps to grow technology and advanced manufacturing companies in Massachusetts. Cutting-edge companies have used the ETF to locate or expand, providing jobs and strengthening the innovation economy. Forty-eight loans and guaranties totaling $68.6 million have closed through December 31, 2016. The Fund was last recapitalized in 2007. In an effort to increase both employment and production, the Commonwealth passed legislation in 2010 that allowed MassDevelopment to add a working capital term loan financing product, which helps growing companies address staffing and other working capital needs. In March 2012, the Fund committed $5 million to a new venture capital fund managed by MassVentures. This partnership allows the ETF to invest equity in earlier-stage companies while leveraging existing resources at MassVentures.