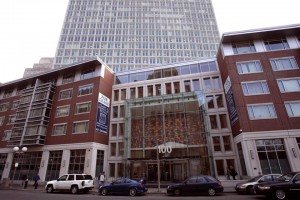 The state’s chief development agency is cashing in on Boston’s rising real estate market by selling the rights to operate a prominent office tower on Cambridge Street.

MassDevelopment will seek bidders for a 68-year lease to manage 100 Cambridge St. in Government Center. The 21-story building is occupied by government agencies as well as private companies.

Jones said the state-owned building is not a development opportunity, but she said it should prove attractive to buyers because of steadily rising office rents in downtown Boston. Built in 1965, the tower, formerly known as the Leverett A. Saltonstall Office Building, fell into disrepair and was gutted by MassDevelopment in 1999. The agency added 75 condominiums at the base of the building, along with 25,000 square feet of retail stores.

It was reopened as 100 Cambridge St. in 2004. Tenants include the state's Department of Environmental Protection and Department of Housing and Community Development; Massachusetts General Hospital; and the nonprofit American Student Assistance.