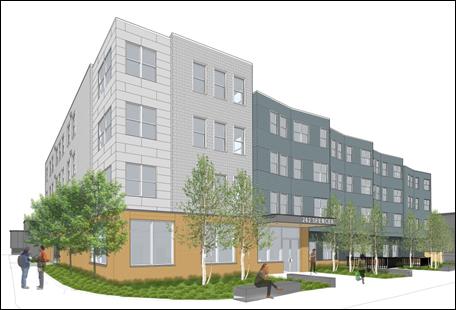 MassDevelopment has issued a $6,885,580 tax-exempt bond for The Neighborhood Developers (TND), a nonprofit community development organization in Chelsea. TND is using bond proceeds to buy and demolish a building at 242 Spencer Avenue in Chelsea to build, furnish, and equip a four-story, 34-unit rental apartment facility in its place. All units will be available to households earning no more than 60 percent of the area median income. MassDevelopment also assisted the Massachusetts Department of Housing and Community Development with the approval of federal low-income housing tax credits that will provide about $4.9 million in equity for the project. Boston Private Bank purchased the bond.

“This project combines two tenets of MassDevelopment’s mission: building and preserving affordable housing for Massachusetts communities, and transforming vacant and underused properties into active, attractive sites,” said MassDevelopment President and CEO Lauren Liss. “We are pleased to work with The Neighborhood Developers to provide affordable housing options in Chelsea, a lively and dynamic Gateway City.”

Founded in 1979 in Chelsea, TND emphasizes building vibrant neighborhoods through an integrated approach to revitalization. The organization partners locally to build affordable apartments and mixed-income homes through its real estate development programs, improve financial mobility for residents through its CONNECT financial opportunity center, and create and foster community engagement and opportunity through neighborhood organizing efforts addressing issues ranging from litter on the street to community safety. In 2010, TND began working in the Shirley Avenue neighborhood in Revere and now offers all of its programs in both Chelsea and Revere. TND owns 346 apartments and has developed 38 homes for sale to first-time homebuyers. TND was also a lead developer for the Box District homes in Chelsea, a model transit-oriented housing development that received $1.5 million from the Brownfields Redevelopment Fund, which MassDevelopment administers on behalf of the Commonwealth. MassDevelopment previously provided a $5,825,000 tax-exempt bond for TND in 2016 to preserve, renovate, and build 52 units of affordable housing in Chelsea and Revere.