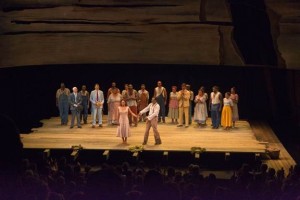 MassDevelopment and the Massachusetts Cultural Council have provided a $146,213 Cultural Facilities Fund grant to Cambridge’s American Repertory Theater Company (A.R.T.), Inc. The A.R.T. used grant funds to upgrade the lighting and projection systems of the Loeb Drama Center, the 540-seat venue for the theater’s mainstage productions.

“For decades, the A.R.T.’s cutting-edge productions have captivated Cantabridgians, other Massachusetts residents, and visitors alike,” said MassDevelopment President and CEO Marty Jones. “We’re pleased the Cultural Facilities Fund can support renovations to its central venue, continuing the A.R.T.’s work in expanding the boundaries of theater.”

The American Repertory Theater at Harvard University, founded in 1980, has won numerous awards, including the Tony Award, the Pulitzer Prize, and Elliot Norton and Independent Reviewers of New England awards, and TIME Magazine has named the A.R.T. one of the top three regional theaters in the country. At the 2012 TONY Awards, The Gershwins’ Porgy and Bess, which was developed at the A.R.T. before moving to Broadway, won Best Revival of a Musical. The A.R.T. provides undergraduate classes in acting, directing, dramatic literature, dramaturgy, voice, and design. It is also home to the Institute for Advanced Theater Training, a two-year, five-semester graduate program in conjunction with the Moscow Art Theater School.

“The A.R.T. is incredibly grateful for the support of MassDevelopment and the Massachusetts Cultural Council through the Massachusetts Cultural Facilities Fund, and deeply appreciates the program’s support of our mission to expand the boundaries of theater,” said A.R.T. Artistic Director Diane Paulus. “The upgrades made to our mainstage through this grant allow us to continue to provide world-class theater for audiences from all across the Commonwealth.”

MassDevelopment, the state’s finance and development agency, works with businesses, nonprofits, financial institutions, and communities to stimulate economic growth across the Commonwealth. During FY2011, MassDevelopment financed or managed more than 300 projects generating investment of $3.8 billion in the Massachusetts economy. These projects are projected to create more than 10,000 jobs (2,547 permanent and 8,129 construction), and build or rehabilitate more than 1,000 residential units.