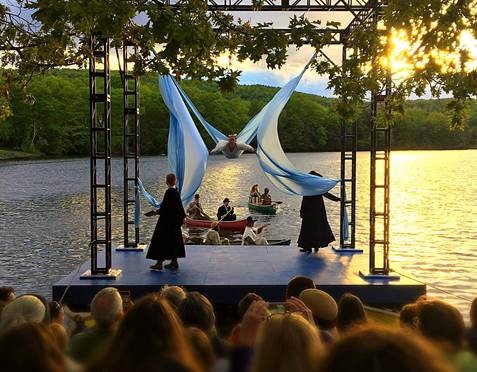 MassDevelopment and the civic crowdfunding platform Patronicity have launched a new Commonwealth Places campaign with Double Edge Theatre for “Collaborative Imaginings,” a project to convert vacant and underused farm buildings into beautiful new spaces for the performing arts. Double Edge Theatre calls Collaborative Imaginings a love letter to the theater’s rural hometown of Ashfield, as the project will transform these buildings into a vibrant rural arts campus. Collaborative Imaginings aims to make Franklin County a destination that aggregates creativity, artistic expression, imagination, and culture alongside a rural identity, demonstrating how art is key to economic sustainability.

Double Edge Theatre’s mission is to create a 'living culture' by developing the highest quality of original theatre performance, based on the long-term imaginative work of its ensemble of artists and their rich interaction with the communities in which the work takes place and by cultivating a permanent center of performance.

“Double Edge Theatre’s vision for these farm buildings marries Franklin County’s rich artistic ecosystem with the region’s rural heritage,” said MassDevelopment President and CEO Lauren Liss. “It has been a pleasure to work with Double Edge Theatre on previous capital projects through the Agency’s Cultural Facilities Fund, which helped the theater expand and renovate its space. This campaign will further show how art can accelerate economic growth, and we look forward to watching the project unfold.”

If the campaign reaches its crowdfunding goal of $50,000 by June 8, 2018, at midnight, the project will win a matching grant with funds from MassDevelopment’s Commonwealth Places program. Learn more and donate at patronicity.com/DoubleEdgeTheatre.

"Arts-driven community development is when cultural and arts organizations in rural or marginalized communities work to improve their economies by leveraging their creativity and artistic and cultural assets and find creative solutions to local challenges, This is exactly what Double Edge Theatre wants to do in Ashfield," said Stacy Klein, founder of Double Edge Theatre.