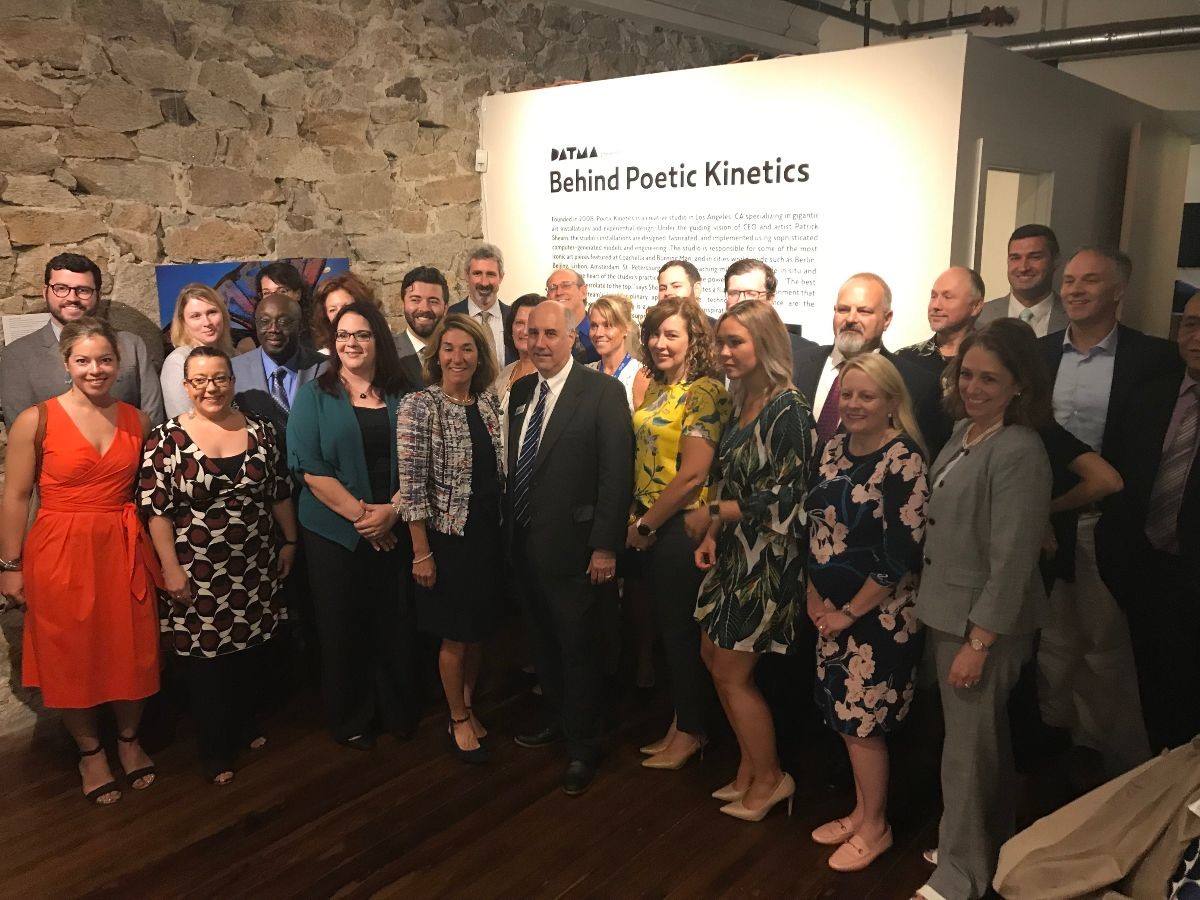 “In Gateway Cities across the Commonwealth, we’re seeing investments and capacity-building through the Transformative Development Initiative leading to strategic wins and progress toward long-term development goals,” said Governor Charlie Baker. “Our administration is pleased to further expand this program, which represents an innovative, block-by-block approach to revitalizing local economies.”

“I was proud to join local officials, community members, and our partners at MassDevelopment today to announce new support for the Transformative Development Initiative,” said Lt. Governor Karyn Polito. “In New Bedford and in other Gateway Cities, I’ve seen firsthand how this program is helping connect and empower local champions with the tools they need to advance their communities.”

The announcement includes the selection of new districts in Chicopee and Fall River and the creation of a pilot regional fellow that will work across three Gateway Cities in southeastern Massachusetts, Attleboro, Barnstable, and Brockton. The Chicopee and Fall River districts will be awarded TDI fellows, who will provide economic development expertise and collaborative leadership in these cities.

The new fellows will join established fellows in existing districts in Chelsea, Fitchburg, Lawrence, and Worcester. Springfield, which was designated a TDI district in 2015, will remain a district and retain its fellow for two additional years thanks to a major financial commitment from MassMutual, the City of Springfield, and the Downtown Springfield BID. TDI districts receive technical assistance from third-party consultants and are eligible for special grants and real estate investments.

The announcement also includes the awarding of $270,000 in TDI Local grants to 10 projects in seven existing TDI districts to support downtown improvements for small business acceleration and job creation. Today’s announcement marks the third round of this competitive grant program for TDI districts; the first two rounds included awards made to 16 projects in 10 TDI districts, with a total of $601,000 awarded.

“Congratulations to the new TDI districts in Chicopee and Fall River, to the cities in southeastern Massachusetts receiving a pilot regional fellow, and to the communities and organizations receiving TDI Local grants to support downtown improvements,” said Housing and Economic Development Secretary Mike Kennealy. “Its unique tools and flexible approach continues to make the Transformative Development Initiative an effective program for catalyzing economic development within Gateway Cities.”

MassDevelopment is also directing $450,000 to select properties in New Bedford, Springfield, and Worcester through its TDI Equity Investment Program, which allows the Agency to make strategic real estate investments in sites that will help spur transformative development in and around a TDI district.

“Downtown New Bedford continues to blossom as a cultural destination, a commercial center, and a hub of start-up activity for the entire region. That renaissance would not be possible without strategic investments from our state partners in the Baker-Polito Administration, especially support from the Transformative Development Initiative. With a range of downtown development projects in various stages, and robust collaboration underway among our many private-sector and state partners, I have never been more optimistic about downtown New Bedford’s prospects,” said New Bedford Mayor Jon Mitchell.

“Since the establishment of the UMass Star Store 20 years ago, downtown New Bedford has undergone a complete arts and cultural renaissance,” said Senator Mark Montigny, who wrote the legislation creating the arts campus and has long-championed state funding to support the transformation. “TDI has been a welcomed addition to this success in more recent years and we’re pleased to see this partnership continue alongside the many artists and musicians who have long made New Bedford so special.”

“Over the past three years, New Bedford’s Downtown has experienced many tangible, positive impacts of the Transformative Development Initiative—a long-time Gateway City economic development priority,” said Representative Antonio F. D. Cabral. “From investments in our arts community to small-business development and collaboration, the benefits of TDI have been widespread. MassDevelopment has done incredible work implementing the program and I am incredibly grateful for the Initiative’s robust growth throughout the Commonwealth.”

“Investments like those announced today have proven again and again to be excellent opportunities to spur economic development in New Bedford and other Gateway Cities,” said Representative Christopher Hendricks.  “The cooperation and collaboration between the State, the City of New Bedford, and local partners demonstrates that, with the right tools, we can lead transformative change in our community.”

"TDI has assisted in the overall growth of New Bedford and has improved its public spaces, local arts network, marketing, and community development,” said State Representative Paul Schmid, III. “Without this, progress may have been much slower and less varied. The work that's been done is remarkable."

“With the assistance of the Transformative Development Initiative, the New Bedford Union and Purchase Innovation District has thrived greatly.  The Initiative, along with its local partners here in New Bedford, have helped the District promote and accelerate development, beautify the area and provide beneficial guidance and support on the subject of economic development,” said Representative William M. Straus.

TDI works with cross-sector partnerships to engage community members, implement local economic development initiatives, and spur further public and private investment. During the program’s first three and a half years, MassDevelopment has invested $13.5 million in the TDI districts through tools such as technical assistance, real estate investments, grant programs, and fellows who work in the districts. That investment has directly influenced over $39.8 million and assisted an additional $80.6 million of public and private investments in the districts.

Chicopee – 2-year designation
The West End Live/Work/Play District in the urban core of Chicopee Center aims to become a vibrant community that provides a high quality of life for its residents and visitors by supporting local entrepreneurship, hosting cultural events and recreational opportunities, and establishing an array of housing, dining, and shopping options within walking distance. For the past year, Chicopee was designated a Partnership Development District during which time it received directed strategic assistance and partnership-building support to advance its district vision; because it its success, the city has been awarded a two-year designation with a fellow and additional TDI tools.

Fall River – 2-year designation
The South Main Street Revitalization District will focus on attracting residents and visitors to the area by improving the real and perceived safety of the area, connecting to the arts district, increasing nightlife, assisting in small business development, and increasing connectivity to the waterfront. For the past year, Fall River was designated a Partnership Development District during which time it received directed strategic assistance and partnership-building support to advance its district vision; because it its success, the city has been awarded a two-year designation with a fellow and additional TDI tools.

South Region Fellow – 2-year designation
As a pilot regional approach to providing additional staff assistance, a fellow will work across the cities of Attleboro, Barnstable, and Brockton. These cities will receive economic development capacity building and implementation support from the fellow as well as limited technical assistance from third-party consultants.

Sabura Youth Programs – $15,000
This Lease It Local grant will provide capital support for PROVA!’s 2019 summer season, which will activate a vacant space in downtown Brockton with arts and cultural programming, a brewery, and a rotation of four local restaurants. This grant, which TDI partners will match with another $59,000, will pay for programming and site operations during the pop-up event to showcase the potential for a permanent buildout of the space to investors.

Chelsea Chamber of Commerce Foundation – $20,000
The CHISPA BizLab will provide small business technical assistance and advocacy for Latino businesses in Chelsea and serve as an incubator for new startups in Chelsea’s business district. The Chelsea Chamber of Commerce Foundation developed a unique proposal to use this $20,000 grant, which it will match with another $6,000, to help CHISPA BizLab develop programming and resources specifically for the large concentration of food-related businesses in the district.

Chelsea Chamber of Commerce – $20,000
Building on technical assistance performed by consultant Visual Dialogue, the Chelsea Chamber of Commerce will use this Find it Local grant to rehabilitate the gazebo in the heart of Bellingham Square. This project, supported by a $55,000 matching grant from the Chamber, will help provide a visual anchor for community-driven programming and support district branding efforts.

Fitchburg State University – $30,000
Fitchburg State University, together with ReImagine North of Main, will use this $30,000 Lease It Local grant for its Retail District Lease program, which will provide lease subsidies to businesses in a concentrated location to encourage business and property owners to cultivate a critical mass of local business leaders. The TDI partners and local property owners will match grant funds with an additional $30,000.

Fitchburg State University – $35,000
This $35,000 Local Lift grant will support the North of Main Façade Improvement Program, which provide incentives for private-sector improvement of commercial buildings in the TDI District. The program aims to make revitalization efforts affordable by providing matching grant funds to private building and business owners for façade projects that to protect the historic integrity of the building while improving the appearance of the downtown area. Fitchburg State University, alongside ReImagine North of Main and local property owners, will match grant funds with an additional $35,000.

Lawrence Partnership – $40,000
This $40,000 Local Lift grant will support Local Lift Lawrence, a program of the Lawrence Partnership and the Lawrence Redevelopment Authority that provides matching grants for the funding of well-designed and coordinated improvements to storefronts to create a more attractive downtown image. The program will accept proposals in two categories: (1) visibility and signage improvements for small businesses whether that be tenants or property owners; and (2) façade capital improvements for property owners. The TDI partners and local property owners will support this project with an additional $40,000 in leveraged funds.

New Bedford Economic Development Council – $40,000
This $40,000 grant will go towards the New Bedford Economic Development Council’s Wicked Cool Places grant program. This grant will support the efforts of a collaborative of local property and business owners, artistic and cultural groups, design and preservation specialists, and business and development experts as they transform New Bedford’s overlooked or undervalued places through creative placemaking initiatives.

City of Pittsfield – $15,000
The City of Pittsfield developed a unique proposal to establish a three year pilot EforAll affiliate in Pittsfield. The program, currently active in six other Massachusetts communities, will consist of two staff members that are based in Pittsfield and are responsible for managing four entrepreneurial pitch contests and two year-long accelerator programs per year, including recruiting 50-plus participants and leveraging 100-plus local volunteers per year. The City and other partners will match this $15,000 grant with more than $250,000 in funding.

Main South Community Development Corporation – $15,000
Main South Community Development Corporation will also use a $15,000 Local Launch grant that it will match with $15,000 to activate public spaces in Main South, including empty lots, while also building business leader capacity. This program will offer mini-RFPs for business owners and other community members to apply for funding for their own programs that will promote the area and lead to increased foot traffic.

About MassDevelopment
MassDevelopment, the state’s finance and development agency, works with businesses, nonprofits, financial institutions, and communities to stimulate economic growth across the Commonwealth. During FY2018, MassDevelopment financed or managed 384 projects generating investment of more than $4.1 billion in the Massachusetts economy. These projects are estimated to create or support 10,994 jobs and build or rehabilitate 830 housing units.