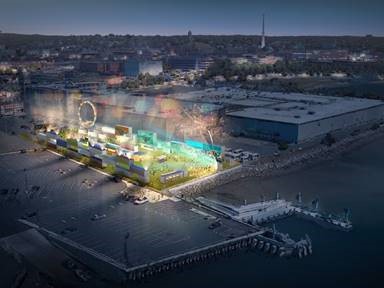 MassDevelopment and the civic crowdfunding platform Patronicity have launched a new Commonwealth Places campaign with Beyond Walls to build a temporary waterfront park in Lynn. Dubbed “The Launch,” the park will activate a vacant waterfront parcel adjacent to the city’s marine transportation facility with art installations, performance space, recreational amenities, and more. By creating meaningful public access to the waterfront, Beyond Walls aims to establish a connection between Lynn’s waterfront and its vibrant downtown, provide small business owners with opportunities to test the market for their creative wares, and promote local and regional awareness of potential water transportation at the Lynn Ferry Terminal. The organization will use campaign funds to buy equipment needed to make this park a reality, including stacked shipping containers and associated infrastructure that will form the perimeter of the park and provide canvases for art installations; a modified container that will function as rotating retail space; and a multi-use futsal court that will be used for sports games and exercise classes.

“Beyond Walls has emerged as a local champion in Lynn, partnering with the city and the community to bring public art and vibrancy downtown through grassroots advocacy,” said MassDevelopment President and CEO Lauren Liss. “We look forward to supporting the organization on its latest project, a transformative plan to activate Lynn’s underutilized waterfront and create space for community engagement, recreation, and entrepreneurship to take root.”

If the campaign reaches its crowdfunding goal of $50,000 by June 30 at midnight, the project will win a matching grant with funds from MassDevelopment’s Commonwealth Places. Learn more and donate to Lynn’s The Launch project at patronicity.com/thelaunchlynn.

Beyond Walls Founder and CEO Al Wilson said, “This project will ensure that area residents have meaningful access to the water's edge with multi-generational amenities in a beautiful setting. As the city works to encourage development in on the waterfront, it is critically important that the area remains accessible to those living, working and visiting downtown Lynn.”