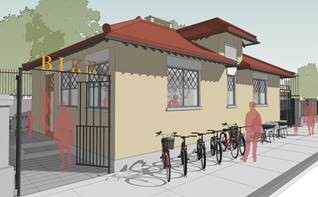 MassDevelopment and the civic crowdfunding platform Patronicity have launched a new Commonwealth Places campaign with The American City Coalition, a Boston nonprofit working on behalf of low-income residents in underserved neighborhoods. The organization’s campaign will bring new life to the old Comfort Station on Columbia Road by transforming it into a local café and bike repair shop. The Sip & Spoke community partnership includes:

Together with the Upham’s Corner community, these partners are working to realize the community’s vision of turning this long-vacant architectural treasure in the Upham's Corner core business district into an active community hub.

“Transforming this historic Upham’s Corner building into a space for community gathering and learning will provide an economic boost to Roxbury and Dorchester,” said MassDevelopment President and CEO Lauren Liss. “We’re pleased to support the Sip & Spoke partnership’s efforts to expand economic opportunity and neighborhood vitality, powered by bicycles and coffee.”

If the campaign reaches its crowdfunding goal of $50,000 by June 30 at midnight, the project will win a matching grant with funds from MassDevelopment’s Commonwealth Places program. Learn more and donate at patronicity.com/comfortstation.

“The reactivation of the Comfort Station will bring an active community hub to the heart of Upham's Corner,” said Christine Araujo, Executive Director, The American City Coalition. “The project will contribute to the vitality of the neighborhood by restoring a historic building, expanding access to green spaces and creating jobs. The bike shop and cafe--two uses that were defined as important by the community—will add to this beautifully designed space,” added Araujo.