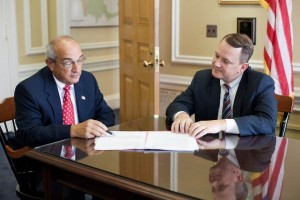 Brig. Gen., USAF (ret.) Don Quenneville, who spent more than 30 years as a fighter pilot and commander in the Air Force and Massachusetts Air National Guard, has joined MassDevelopment as the Agency’s Senior Vice President of Defense Sector Initiatives. In this role, Quenneville will also serve as Executive Director of the Military Asset and Security Strategy Task Force, which Lieutenant Governor Timothy Murray established by Executive Order #541 in February 2012. Quenneville will work closely with the Lieutenant Governor, his staff, and members of the Task Force and its subcommittees to strengthen the Commonwealth's partnerships with its six military installations and protect those bases and the defense sector from potential federal budget cuts.

“Brigadier General Quenneville’s wide range of experience in the military and the defense industry will complement our Administration’s strong commitment to Massachusetts’ military bases and defense jobs,” said Lieutenant Governor Murray, Chair of the Military Asset and Security Strategy Task Force. “MassDevelopment has been a key partner in this work, and Quenneville’s leadership will be critical as we continue to work in collaboration with our bases, the private and non-profit sector, and community and business leaders to fight to protect the jobs, missions, and investments at our military bases and within the defense industry.”

“We’re thrilled to have Don Quenneville on board at MassDevelopment,” said MassDevelopment President and CEO Marty Jones. “The depth of his experience in the military and in Massachusetts uniquely positions him as a leader in defense sector initiatives, making him a great candidate to head this important Task Force.”

General Quenneville began his military career in 1971 and following eight years on active duty, Quenneville joined the Massachusetts Air National Guard’s 102nd Fighter Wing. He served in numerous command and staff positions from squadron pilot to F-15 wing commander and as the commander of the Massachusetts Air National Guard. His final military assignment was Deputy Commander of the Canadian NORAD Region in Winnipeg, Manitoba; he retired in 2007. Prior to his position at MassDevelopment, Quenneville served as executive director of the Defense Technology Initiative in Waltham, which works to connect military installations with the Massachusetts defense technology cluster and make the Commonwealth more competitive for defense employers.

“The units at each of the state's six military installations provide unique capabilities in support of our national security and are major contributors to the Massachusetts defense economy,” Quenneville said. “When Lieutenant Governor Murray signed the Executive Order establishing the Task Force, it underscored the Commonwealth’s commitment to preserve and protect these assets from disproportionate cuts in defense spending. I am honored to serve as the Task Force’s Executive Director and am looking forward to working with state and local officials, military commanders, and industry and academic leaders as we craft a strategy of success.”

MassDevelopment, the state’s finance and development agency, works with businesses, nonprofits, financial institutions, and communities to stimulate economic growth across the Commonwealth. Marty Jones, President and CEO of MassDevelopment, also serves on the Military Asset and Security Task Force and MassDevelopment continues to partner with the Patrick-Murray Administration in efforts to protect and promote Massachusetts’ military bases. During FY2011, MassDevelopment financed or managed more than 300 projects generating investment of $3.8 billion in the Massachusetts economy. These projects are projected to create more than 10,000 jobs (2,547 permanent and 8,129 construction), and build or rehabilitate more than 1,000 residential units.