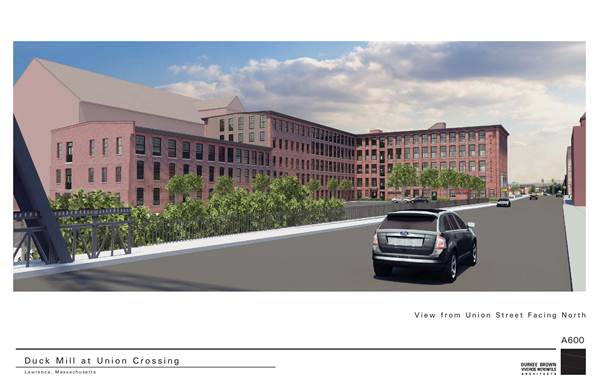 MassDevelopment has awarded a $208,000 grant from the Brownfields Redevelopment Fund to Lawrence CommunityWorks (LCW), a local nonprofit spearheading the Duck Mill – Union Crossing Phase II redevelopment in downtown Lawrence. The organization will use funds for the site’s cleanup, including licensed site professional oversight of above ground storage tank removal and lead-based paint abatement. This second phase of the Union Crossing project is an adaptive reuse of the five-story former cotton and wool manufacturing building known as the Duck Mill, located on the North Canal in downtown Lawrence. When completed, the 2.2-acre site will consist of 10,000 square feet of commercial space and 73 units of affordable rental housing. The units will provide housing for low-income individuals and families. In total, MassDevelopment has provided $338,510  in brownfields funds for the second phase of the Union Crossing redevelopment.

"MassDevelopment is pleased to partner with LCW in its efforts to redevelop the Duck Mill, thereby increasing affordable housing and sparking economic activity in a Gateway City," said MassDevelopment President and CEO Marty Jones. "The money from the Brownfields Redevelopment Fund over the last five years has helped this project revitalize a part of the heart of Lawrence."

"LCW is thrilled to continue our contributions to the redevelopment of Lawrence’s beautiful, historic mill district," said Jessica Andors, Executive Director of LCW. "This project is the result of intensive planning and visioning with local residents and stakeholders, and tenacious hard work by staff, Board, and partners.  It will bring both housing and jobs to the area, and advances our role as a catalytic force in Lawrence’s resurgence."