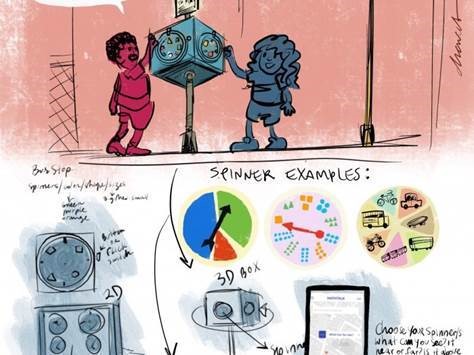 MassDevelopment and the civic crowdfunding platform Patronicity have launched a new Commonwealth Places campaign with the City of Cambridge and Math Talk, which will use funds to create interactive early math learning installations at Sennott Park and on nearby streets in The Port neighborhood. Math Talk is an early education company that transforms everyday public places, like waiting rooms, barbershops, bodegas, parks, bus stops, and streets into creative and engaging early learning environments. Dubbed “MathScapes,” these creations pair artistic, culturally relevant and accessible physical installations with the company’s free MathTalk app, enabling adults and children to use their immediate environment to playfully explore key early math concepts. In Cambridge, Math Talk will install MathScapes at Sennott Park and near the intersections of Bishop Allen Drive, Columbia Street, and Washington Street. MathTalk plans to engage a range of community stakeholders to assist in designing the MathScape installations, including artists, designers, students, early education professionals, and families.

“Math Talks transforms ordinary public places into exciting learning environments that help children get an early start in mathematics, all while driving foot traffic to this corner of Cambridge,” said MassDevelopment President and CEO Lauren Liss. “MassDevelopment is pleased to support the development of this unique placemaking project and looks forward to seeing this MathScape in action.”

“We love taking public spaces and making them into family play areas. The MathTalk approach takes everyday activities that we all do with our kids, and turns those same activities into opportunities for learning, laughing and playing - all with math concepts embedded. We know that this helps kids to develop the neural pathways they need to accelerate their own learning later, all while having more fun right now,” said MathTalk Founding Team Member Omo Moses.

If the campaign reaches its crowdfunding goal of $30,000 by September 28 at midnight, the project will win a matching grant with funds from MassDevelopment’s Commonwealth Places program. Learn more and donate at https://www.patronicity.com/project/mathscapes#!/.

Commonwealth Places is a collaborative initiative from MassDevelopment and Patronicity that leverages public support for placemaking projects through crowdfunding and a matching grant from MassDevelopment. The program engages residents in the development of strategic projects in their towns and cities and has supported successful campaigns across the Commonwealth, from Northampton to Hyannis. Communities, nonprofits, and other entities can learn more about these successful projects, donate to ongoing campaigns, and apply at www.massdevelopment.com/commonwealthplaces.