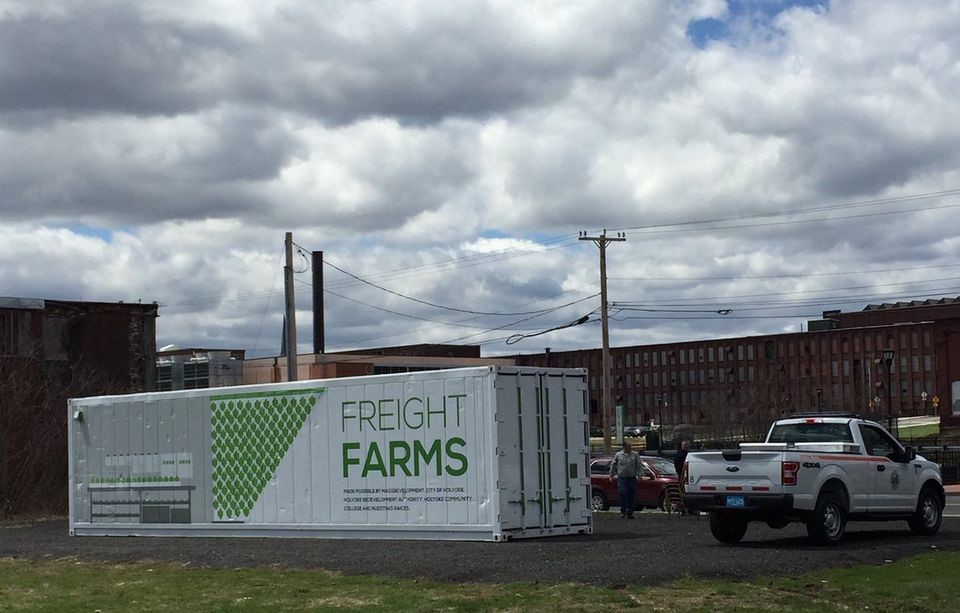 HOLYOKE -- Two large metal boxes, recently plunked down in a vacant lot at 150 Race St., represent a new chapter in the city's ongoing pursuit of economic growth and revitalization.

In this instance, some of that growth is quite literal, involving such things as lettuce, spinach, basil, cilantro and other leafy greens.

Each white and green box, former a shipping container, now houses a self-contained hydroponic unit that will soon be growing the vegetables.

The 40-foot-long units, created by a company called Freight Farms, pack a lot of growing power. Each one, Mayor Alex Morse and others said, can grow as much in a year as two acres of farmland.

They represent an investment of nearly $208,000, provided by MassDevelopment as part of its Transformative Development Initiative. The program is meant to accelerate economic growth in the state's Gateway Cities.

Other partners include Nuestras Raices, the city of Holyoke and the Holyoke Redevelopment Authority.

Officials, including Morse and Jay Ash, state secretary of Housing and Economic Development, announced the Holyoke Freight Farms urban agriculture project during a press conference Thursday at the growing site.

"Every time we come out here, every time we see a new project, we get really excited," said Ash.

"This project is really cool," Morse said. "When people think about Holyoke sometimes, or a city, they don't think so much about urban agriculture and farming."

Nuestras Raices, a nonprofit that also manages community gardens throughout the city, will run the day-to-day container operations. The city and HCC will share the costs of utilities, maintenance and labor.

"It means there are a lot more opportunities to grow food that is so much needed in this community," said Hilda Roque, executive director of Nuestras Raices.

The containers will be used to teach hydroponic growing techniques to agricultural interns from the community and HCC.

Some of the harvested produce will be sold to the HCC MGM Culinary Arts Institute, HCC on-campus dining services, and local restaurants. Some will be donated to help feed hungry people on campus and in the community.

Ash and Morse also announced a MassWorks Infrastructure Program award of $1.6 million, part of a nearly $5 million project that will see the reconstruction of Heritage and Front streets. The project will also rebuild Dwight Street between the first level canal and the Maple Street intersection.

The project is also being funded with federal, state and city transportation funding resources.

The project will repave, redo the stormwater system underground, provide pedestrian lighting, trees, sidewalks and parking as well as create frontage for two commercial buildings separated from the street by an old rail spur on Front Street.