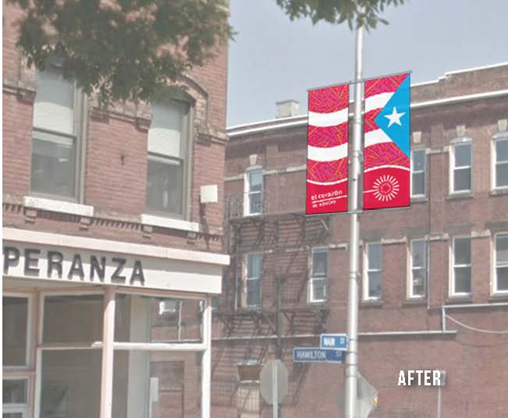 MassDevelopment and the civic crowdfunding platform Patronicity have launched a new Commonwealth Places campaign with the City of Holyoke, the Center for Design Engagement, and Nueva Esperanza for a creative placemaking project to activate Main Street and celebrate Holyoke’s Puerto Rican and Latinx community. The project, dubbed El Corazón, or “The Heart of Holyoke,” was developed using feedback from a survey of residents of the city’s newly designated Puerto Rican Cultural Area, and will fund three public art installations downtown: (1) large and welcoming gateway markers that will cover two decommissioned electrical towers; (2) colorful banners that will be hung on light posts along a stretch of Main Street from I-391 to Lyman Street; and (3) community-developed murals and art installations that will be placed on several storefronts, windows, and fences.

“By infusing culturally significant artwork along Holyoke’s Main Street corridor, ‘The Heart of Holyoke’ aims to show all who live, visit, shop, or dine in downtown Holyoke what this diverse and vibrant neighborhood is all about,” said MassDevelopment President and CEO Lauren Liss. “MassDevelopment looks forward to contributing to this project through Commonwealth Places, and is eager to see how these streetscape improvements provide a boost to the local economy.”

If the campaign reaches its crowdfunding goal of $20,000 by May 19 at midnight, the project will win a matching grant with funds from MassDevelopment’s Commonwealth Places. Learn more and donate to the Heart of Holyoke at patronicity.com/heartofholyoke.

“We’re grateful to MassDevelopment and Patronicity for providing this platform where we can bootstrap and boost our local efforts towards making our communities better,” said Holyoke Mayor Alex B. Morse. “Making artistic expression a clearly visible piece of placemaking and redevelopment efforts is dearly important to my Administration, as our communities thrive not only on better bricks-and-mortar construction, but also by publicly reflecting our hopes for the future and the things that make us proud of our past.”