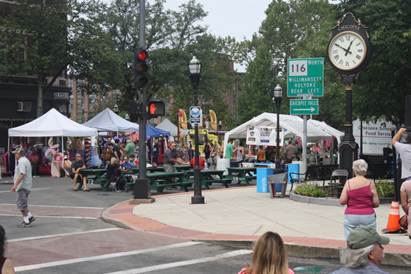 MassDevelopment and the City of Chicopee today announced a new campaign through the civic crowdfunding platform Patronicity and the Commonwealth Places initiative. The Chicopee Center Gateway Project campaign will fund downtown beautification efforts in Chicopee, including signature banners, flower planters and other landscaping, and a signature public art bus shelter. This project will build off the momentum of other redevelopment efforts in the city to make Chicopee a more attractive place for residents, businesses, and visitors.

“The Gateway project will help downtown Chicopee catalyze local business development and enhance the city’s sense of community by beautifying its streetscape,” said MassDevelopment Vice President of Real Estate Services Amanda Maher. “The Commonwealth Places initiative allows communities to provide gathering places for residents and inspires individuals to invest in their surroundings, and we look forward to the same success in Chicopee as we have seen with our past projects.”

If the campaign reaches its crowdfunding goal of $17,000 by August 11 at midnight, it will win a matching grant with funds from MassDevelopment’s Commonwealth Places program. Learn more and donate at www.Patronicity.com/Chicopee.

“We’re looking forward to having a location downtown that is going to be warm and inviting not only for existing residents, but also hopefully to encourage new ones to come,” said Chicopee Mayor Richard J. Kos.

“Beautifying these areas will send a message to our community that revitalization is happening and that there are exciting things taking place in downtown Chicopee,” said Jessica Roncarati-Howe, President of the Chicopee Chamber of Commerce.