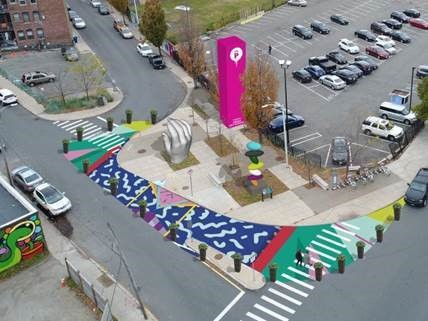 MassDevelopment and the civic crowdfunding platform Patronicity have launched a new Commonwealth Places campaign with the North Shore Community Development Coalition, which will use campaign funds to make streetscape improvements to Congress Street, a corridor in the Point neighborhood of Salem that is home to many small businesses but is too-frequently used as a convenient cut-through for drivers in route to other parts of the city. To help transform Congress Street into a vibrant retail and restaurant district, North Shore CDC will (1) create a public art plaza at the intersection of Congress Street and Ward Street that will reduce traffic and create an attractive outdoor gathering space; and (2) install three custom-designed parklets with outdoor seating, plantings, bicycle parking stations, and play areas near the Espacio Community Program Space and local businesses.

“These design enhancements along Congress Street will improve walkability, benefit local businesses, and set the stage for further public space improvements down the road,” said MassDevelopment President and CEO Lauren Liss. “We look forward to supporting this campaign to make the Point neighborhood an even more unique and vibrant commercial destination.”

If the campaign reaches its crowdfunding goal of $40,000 by May 31 at midnight, the project will win a matching grant with funds from MassDevelopment’s Commonwealth Places program. Learn more and donate to Revitalize Congress Street at patronicity.com/revitalizecongressstreet.

"We are so grateful for the support of MassDevelopment and Patronicity,” said Mickey Northcutt, CEO of North Shore CDC. “This project is an exciting step for Congress Street, the key corridor in the Point neighborhood, and will lay the groundwork for so much more investment in the coming years."

"Congress Street is the actual heart of the Point neighborhood and where everyone gathers in the summer time,” said Point resident Shantel Alix. “This revitalization project will allow people to appreciate the neighborhood more and it will add value to the community."