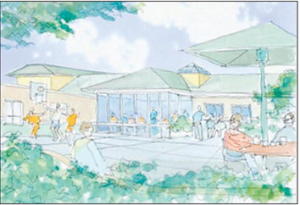 DEVENS - If you think the nearly 11 percent job growth at Devens between 2013 and 2014 was simply a lucky surge from the national economy bouncing back, think again.

Bristol-Myers Squibb's campus expansion has already begun, with plans to add up to 380 new jobs at its Jackson Road location, according to Peter Lowitt, executive director of the Devens Enterprise Commission.

Health Partners New England and GFI Partners are also expected to soon begin construction of a 104-bed hospital called Health Partners Treatment and Recovery Center on Patton Road, which will employ up to 200 medical professionals.

In the meantime, more people are calling Devens home.

In 2013, there were 140 units of housing. Now, Concord-based Devens Village Green, LLC, is ready to build a 124-unit development on Grant Road in multiple phases.

New residents will find easy access to local trails. The U.S. Fish and Wildlife Service is building a Visitor Contact Station at the Oxbow Wildlife Refuge on Hospital Road while MassDevelopment has recently built head kiosks for local trails.

The industrial, residential and recreational expansions are no accident; it's the results of the efforts to make the former Army community "a place to work, live and play," in accordance with the vision provided by the residents of Ayer, Harvard and Shirley, Lowitt said.

Next year will mark the 20th anniversary of the handing over of control of the former Fort Devens to the state.

MassDevelopment, a quasi-state economic development agency, is responsible for operating the community until 2033, when it will make a recommendation to the state government about a permanent government structure.

The Devens Enterprise Commission serves as the permitting authority for Devens.

Thanks to the skilled workforce, such as that in the high-technology field, Devens continues to be a "significant employment center and contributor to the commonwealth's high-tech economy," contributing $1.5 billion to the state economy when ripple effects of Devens' economic activities are taken into consideration, according to the UMass Donahue Institute's businesses, while existing employers are adding jobs, Lowitt said.

The UMass Donahue Institute's report, "Business and Organizations Located in Devens. Profile and Economic Contributions," was issued in July 2014.