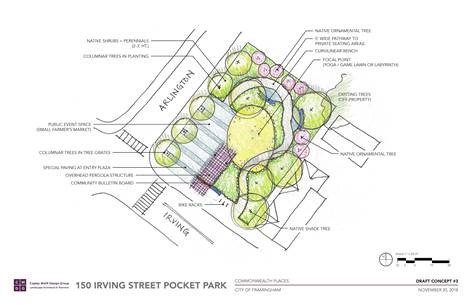 MassDevelopment and the civic crowdfunding platform Patronicity have launched a new Commonwealth Places campaign with the City of Framingham to transform a vacant gravel parking lot, located one block south of Irving Square in downtown Framingham, into a much-needed neighborhood park complete with trees, flowers, benches, a winding path, a corner gathering place, and a shade pergola. Landscape architect Christine Wilson of Copley Wolff Design Group facilitated a site visit and visioning workshop with nearby residents in fall 2018 and created a conceptual design for the pocket park using community input.

“This park will be a welcome addition to all who live, work, or visit Framingham,” said MassDevelopment President and CEO Lauren Liss. “In addition to activating a vacant lot, the park will serve as an inviting gateway to all the shops, restaurants, and amenities located downtown.”

If the campaign reaches its crowdfunding goal of $50,000 by June 30 at midnight, the project will win a matching grant with funds from MassDevelopment’s Commonwealth Places program. Learn more and donate to Framingham’s Irving Street Park project at patronicity.com/irvingstreetpark.

“A thriving downtown requires beautiful and vibrant public spaces for residents, visitors, and workers to enjoy,” said Erika Jerram, Framingham’s Deputy Director of Community and Economic Development. “South side residents want and need more green space and this park will be a great investment in our community.”