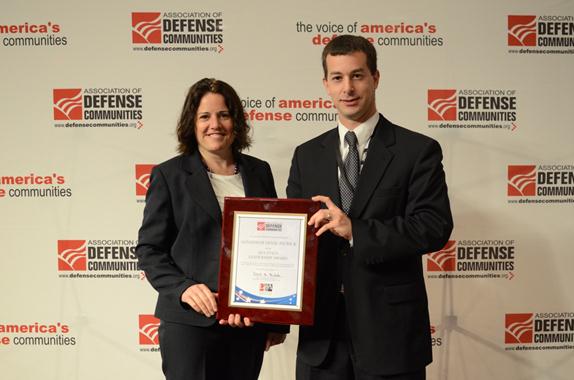 Today's award was accepted on behalf of Governor Patrick by Policy Advisor to the Governor and Executive Director of the Military Asset and Security Strategy Task Force Adam Freudberg and MassDevelopment's Executive Vice President for Legislative and Defense Sector Initiatives Anne Marie Dowd. (Photo Credit: AJ McCafferty for the Association of Defense Communities)

ADC is the nation’s premier organization serving America’s military base communities. The Governor received today’s award for his role in the development of an innovative model to bring together officials at all levels in support of military installations and surrounding communities. In 2012 Governor Patrick approved the creation of the Military Asset and Security Strategy Task Force, spearheading one of the nation's most comprehensive efforts to support a state’s military installations and their host communities, advancing initiatives in workforce training, transportation, veterans’ services, energy and housing.

“Governor Patrick’s keen leadership brought together key resources that strengthened partnerships between local, state and federal governments. His leadership contributed to the Commonwealth’s economic vitality and strengthened our education institutions to help preserve our military heritage and keep our citizens safe,” said Major General L. Scott Rice, The Adjutant General of the Massachusetts National Guard. “I thank Governor Patrick and the key leaders of the Massachusetts Military Asset and Security Task Force for their tireless efforts and strong leadership.”

“Congratulations to the Governor on this well-deserved award,” said MassDevelopment President and CEO Marty Jones. “We’re pleased to partner with the Administration as a member of the Military Task Force, as Massachusetts bases are a vital piece of the state economy.”

The six military installations in Massachusetts include Barnes Air National Guard Base in Westfield; Fort Devens; Hanscom Air Force Base; Joint Base Cape Cod; Natick Soldier Systems Center and Westover Air Reserve Base in Chicopee. These installations account for a total economic impact of $14.2 billion and more than 46,500 Massachusetts jobs. To the benefit of these installations, the surrounding communities and the Commonwealth’s economy, the Military Task Force coordinates efforts of government, industry, and academia to address education, workforce training, infrastructure improvements, environmental/utility matters, veterans’ services, and housing and transportation issues related to the missions and people at Massachusetts’ military installations. The Task Force is co-chaired by Governor Patrick, Congresswoman Niki Tsongas and former Senator William “Mo” Cowan.

ADC is comprised of more than 200 defense communities, states and regions, and partner organizations, united around issues such as the protection of defense infrastructure, community-military partnerships, mission sustainment and support to military families and veterans. The State Leadership Award is part of the annual Defense Community Awards program which recognizes those communities, installations, public officials and military leaders demonstrating leadership, innovation and excellence.

“Governor Patrick’s leadership serves as a model for how other states can bring together public officials from all levels of government to support installations, military missions, redevelopment communities, service members, their families and veterans,” said ADC President Bob Murdock. “Massachusetts holds an important historic role in our nation’s security, and Governor Patrick and other state leaders are continuing that tradition with their commitment to collaboration, partnership and innovation.”

“Governor Patrick has made it a priority to support and highlight the extraordinary work being done at Massachusetts’ military installations,” said Congresswoman Niki Tsongas (MA-3). “He recognizes that these facilities play a critical role in ensuring we provide the very best services and resources to our nation’s servicemembers while having a significant economic impact on the region. The Governor’s leadership has helped make Massachusetts a hub of innovation and a leader in developing cutting-edge technology that increases the safety and effectiveness of our servicemembers.”

The Military Task Force’s efforts complement the Patrick Administration’s strong commitment to the more than 500,000 veterans and military families who live in Massachusetts and today’s award recognizes that commitment. As a nationwide leader in veterans’ services the Commonwealth continues to implement employment assistance and workforce training programs for members of the armed forces, veterans and their spouses. The Patrick Administration has worked to ensure newly returning veterans, as well as Massachusetts’ aging veteran population, continue to receive quality health, housing and employment services to honor their service.

To learn more about the Task Force, please visit: www.mass.gov/governor/military.