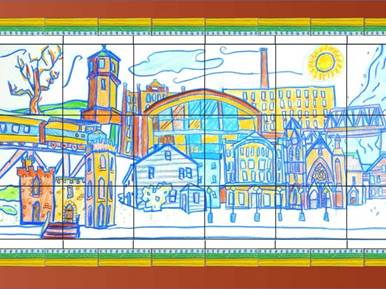 MassDevelopment and the civic crowdfunding platform Patronicity have launched a new Commonwealth Places campaign with the Garibaldi Club, a nonprofit Italian club that is seeking to activate an underused parking lot next to its building at 86 Washington Street in downtown Haverhill. The Garibaldi Club will use campaign funds to create a large public mural on the sidewall of its building, which abuts the parking lot. The lot regularly fills up on Thursdays and Fridays but remains mostly empty on other days, so the Club has planned a variety of community events that will take place at the mural to energize the space and attract residents to this area of downtown.

"Thoughtful and creative placemaking projects, like the proposed community mural in downtown Haverhill, have the ability to transform ordinary public spaces into lively destinations," said MassDevelopment President and CEO Lauren Liss. "We at MassDevelopment look forward to seeing the positive impact this project will have on nearby shops, restaurants, and other local businesses as more and more residents are drawn to this part of downtown."

The mural will celebrate Haverhill’s diverse identity by depicting local landmarks and featuring crowdsourced photographs of area immigrant families, past and present. Proposed events that will take place at the mural include a groundbreaking celebration, a replication and expansion of the "We Are Haverhill: Changing Faces" storytelling exhibit, previously on display at HC Media Studio 101, as well as an inauguration event, when the complete mural will be unveiled alongside other interactive artwork and presentations by local students.

If the campaign reaches its crowdfunding goal of $9,500 by June 30 at midnight, the project will win a matching grant with funds from MassDevelopment’s Commonwealth Places program. Learn more and donate at patronicity.com/HaverhillMural.

"In a time where what makes us different is often under suspicion or attack, it is more important than ever to make all people feel that the path that brought them and their families to Haverhill is heard and important - because it is. I'm looking forward to bringing Haverhill's diverse and vibrant community together throughout this project's process and to create a truly beautiful and powerful work of art as a testament to their stories. Everybody working on this is excited to see this idea become reality and grow as it moves forward," said Alexander Gobel, the artist who will be designing and creating the mural.