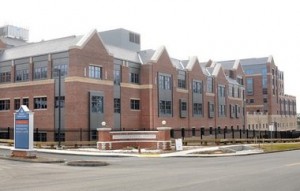 Back in the fall of 2008, Baystate Health officials had a $274 million plan to create the hospital of the future all set to go.

All they needed to do was to borrow money by selling bonds, a routine task until the financial crisis brought the world's credit markets to a halt and plunged the country into the worst recession since the Great Depression.

“In the end, the decision was made to go forward,” he said.

After the economy tanked, the hospital pushed the emergency room off to a later phase of the project, only to add it back in as the recovery took hold.

Dr. Aaron D. Kugelmass, chief of cardiology at Baystate Medical Center and medical director of the Heart and Vascular Program, said the costs involved boggle the minds of even the doctors who helped design the patient rooms and operating rooms.

A single heart and vascular procedure room outfitted for either open-heart surgery or for catheterization common in today's aging population can cost more than $5 million to build. That includes equipment, heating, lighting and special ventilation work.

The Davis Family Heart and Vascular Center has six such rooms, Kugelmass said.

The emergency room, which will have a high-speed elevator to a new helipad on the roof, is still under construction and is set to open in November.

Chalke said that to get the project done, especially the $262 million project without the emergency room included, Baystate had to put up more of its own money, raise more money from donors and make more use of New Market Tax Credits, a federal program meant to encourage economic development in poor neighborhoods and cities with high unemployment.

For example, the original plan called for $185 million borrowed in bonds through the Massachusetts Health and Educational Facilities Authority, which merged two years ago with MassDevelopment, the state’s quasi public economic development agency.

The new plan called for just $135 million in those bonds.

The amount of philanthropy stayed the same at $20 million, but became a higher percentage of the total because of cutbacks in other areas.

Former Baystate Health Board Chairman B. John Dill, president of Colebrook Realty Services, said the New Market Tax Credits are a complicated way to finance anything. Basically, the federal government issues a set dollar amount in tax credits. Banks and other investors get those tax credits by making low-interest loans to agencies with building projects in low-income cities, like the Baystate project in Springfield.

“It’s supposed to be a stimulative program,” Dill said. “So in 2009 the federal government was looking hard for projects that were shovel ready, that could take these tax credits and put the money to work right away.”

Because Baystate had been working on a project for years, it was ready to strike when the iron was hot.

It was Chalke’s job to hunt down entities that had the credits and banks willing to buy them in support of the Baystate project.

“I just made phone call after phone call,” he said.

Chalke said the hospital is only paying about 3 percent interest on the money it did borrow, meaning that it saves about $5 million a year on interest.

“We are the only ones who kept going with our project,” Kugelmass said. “So this is the most state-of-the-art facility.”

Baystate is now $1.8 million short of its goal, said Susan Toner, executive director of the Baystate Health Foundation. Funds collected so far include an unspecified gift from the Davis family, $3 million from MassMutual and $1 million from the D’Amour family, resulting in the D’Amour Family Healing Garden.