Intensive Care For An Ailing City 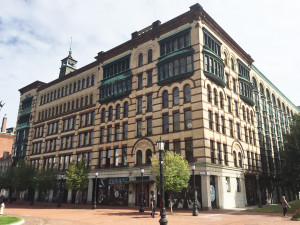 2015 is the year an $800 million casino was supposed to be well under way in downtown Springfield, culminating in two years with the daily arrival of thousands of visitors and new jobs in the Bay State’s second-poorest city.

MGM Grand’s proposal is now in flux, with the casino completion delayed a year and designs being scaled back to control costs. But the city hasn’t put all of its eggs in the gaming basket.

The current approach: start small and promote growth in dense, urban mixed-use districts that can be crossed in a five-minute walk. Attract jobs and civic amenities through public-private partnerships. And hope for economic revitalization to expand outward.

“There’s potential for the district to be catalytic and impact change beyond its boundaries if it really got going,” said Laura Masulis, one of three MassDevelopment fellows embedded in TDI communities for three years as part of the program.

The goal in Springfield is to attract more market-rate apartments, better retail, tech startups and community programming to create a 24-7 neighborhood.

Exploratory surgery will focus on a 4-acre block in the center of downtown bookended by the $89 million Union Station Multimodel Transit Center that will open in late 2016, and the MGM Grand casino site.

Springfield is one of 10 communities in the first round of the TDI program. Approved in 2014, the TDI allocates $15 million for the first 10 districts, providing them with technical assistance, staff support and a chance to receive equity investments from MassDevelopment.

Since moving from the Boston area to Springfield in May, Masulis has conducted more than 200 interviews with community members to gauge the district’s needs. She’s working in concert with groups such as DevelopSpringfield, which recently acquired a block of crumbling commercial buildings near the heart of downtown for a new Innovation Center scheduled to open next year.

Plans for an Innovation Center downtown are key to expanding the professional job base downtown.

Springfield-based incubator Valley Venture Mentors (VVM) is using the model of Boston’s MassChallenge tech accelerator as a guide for expanding a startup ecosystem in the Pioneer Valley.

Since January, the accelerator’s graduate companies have generated $6 million in revenue and investments. The vast majority are remaining in the Springfield region.

“Two years ago, a minimum requirement (from investors) would have been, ‘You’re moving to Boston,’” Silva said. “Nobody brought it up. They were absolutely fine.”

VVM is partnering with DevelopSpringfield, a private nonprofit economic development company, on the launch of an Innovation Center next year a block away. DevelopSpringfield acquired the block of three vacant buildings on Bridge Street, and is renovating the interior into co-working and conference space.

Expanding the residential population downtown is key to expanding the retail real estate market, and additional market-rate housing is a goal, said Masulus, the MassDevelopment fellow. A developer is completing the conversion of former factory space into the 280-unit Silverbrook Lofts at 1611 Main St.

As part of the TDI program, Masulis is working with landlords on an inventory of downtown properties, to assemble better data on vacancy rates. The results will be published in a prospectus and distributed to developers.

To improve street life, vacant ground-floor retail space in the Marketplace building on Main Street will be converted into a month-long holiday pop-up market this year. Temporary retail tenants will be able to use the space for a one-time utility fee no higher than $500.

Integrating MGM Into The Downtown

Bold predictions of the MGM Grand casino as a catalyst for downtown revitalization took a hit this summer when the developer announced groundbreaking would be delayed for a year to coincide with the projected 2018 completion of an I-91 construction project. Since then, MGM has abandoned plans for a 25-story hotel tower in favor of a six-story hotel at the corner of Main and Howard streets. As part of the new designs, MGM’s market-rate housing component has been moved outside the casino site to the vacant Court Square building on Elm Street. The property is owned by the Springfield Redevelopment Authority.

The changes have prompted speculation that MGM is wavering in its financial commitment to Springfield, prompted by expanded gambling venues across Massachusetts and prospects for a nearby third Connecticut casino.

But Masulis sees the changes as an opportunity to integrate the casino further into the existing downtown.

“Taking away the 25-story tower and integrating (the development) into the city is very much in line with the strategies we’ve been talking about of dispersing the impact of (the casino) and utilizing some of the great building and amazing architecture right around the square,” she said.