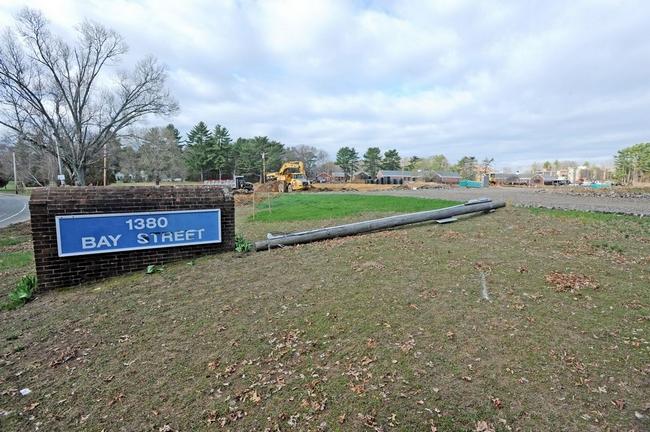 TAUNTON — A deal has been finalized to bring a major regional distributor of wine and spirits to the Myles Standish Industrial Park in Taunton, following the construction of a new $100 million headquarters in the city.

This is a prime example of the local, state and federal government working in unison with our private partners to bring a company with the stature of Martignetti, to anchor our Myles Standish Business Park expansion, said Taunton Mayor Thomas Hoye. We are thrilled that a company with such a rich tradition of success and great corporate citizenship has chosen Taunton as home.

The Martignetti company was enticed to come to the industrial park in Taunton with a TIF, or tax increment financing agreement, which will save the business $5.1 million over 20 years in property taxes. During that time the city will receive $6.3 million in taxes from Martignetti.

The 115-acre parcel of land was sold to Martignetti for $11.5 million, said Kelsey Abbruzzese, a spokesperson for MassDevelopment.

Hoye said he hopes the Martignetti deal will be one of many, drawing businesses to Taunton to contribute to the city's economy.

Taunton needs to continue to recruit great companies, as we continue to expand our local economy, Hoye said.

In a joint statement, two members of the Martignetti family said they were happy with the deal, as the third-generation-owned family company plots its future growth.

We are very pleased to be relocating our distribution and headquarters facilities to Taunton and to begin a new chapter in our company's 100-year history, said Carl and Carmine Martignetti, co-presidents of the company, in a public statement. The Myles Standish Industrial Park is a premier regional location that will support our continued growth. We have appreciated the support and cooperation we have received from the city of Taunton, MassDevelopment and state officials in working together on this exciting project.

The Martignetti group said it plans to build a 680,000-square-foot building on its 115-acre parcel, which represents more than half of a 220-acre industrial park expansion project. Martignetti’s facility will be expandable to 1.3 million square feet to accommodate future growth.

The 220 acres of so-called Phase IV industrial park expansion land was initially acquired for just $1 in 2011 by MassDevelopment and the Taunton Development Corporation, in a development deal with the state for adjoining property to the industrial park at the closed former Paul A. Dever State School for the mentally disabled.

As of right now, in terms of salable lots, only one four-acre parcel is available in the industrial section of the Phase IV industrial park expansion, Abbruzzese said.

A key plan for the Phase IV expansion is the development of a new life sciences business park.

Those plans will go forward after MassDevelopment completes the development of Dever Drive, which will replace the former Watson Street, while its name serves as a reminder of the former state school on Bay Street that was founded in 1952. The expected completion of Dever Drive in the spring of 2016 will open up business park lots on 35 acres of land, Abbruzzese said.

Work on the development of Dever Drive started just last Monday, and it is being built by the Hanover-based P.A. Landers, according to MassDevelopment.

State Senate President Pro Tempore Marc Pacheco, D-Taunton, who has been heavily involved at the legislative level with pushing the industrial park expansion forward, celebrated the finalization of the Martignetti deal.

This project is mutually beneficial, as it will help bolster a strong economic development asset in the region and provide substantial revenue to the Greater Taunton tax base, while it allows a leading, family-owned business to centralize operations at new headquarters, Pacheco said. This opportunity became available due to the public investments we've made in terms of infrastructure and MassWorks grants at Myles Standish Park and I look forward to Martignetti Companies' arrival in Taunton.

In addition to its work to redevelop the land at the Myles Standish Industrial Park, successfully attracting Sullivan Tire to move into a 200,000-square-foot facility there last year, the Taunton Development Corporation and MassDevelopment have completed three phases of demolition and remediation at the former Dever school site. The development groups are cleaning up select parcels with $600,000 in brownfields grants from the U.S. Environmental Protection Agency, according to MassDevelopment.

The expansion of the Myles Standish Industrial Park has resulted from a collaborative effort between public and private stakeholders, a recipe for success that we expect to continue with more companies choosing to locate and grow in Taunton, said Marty Jones, president and CEO of MassDevelopment.