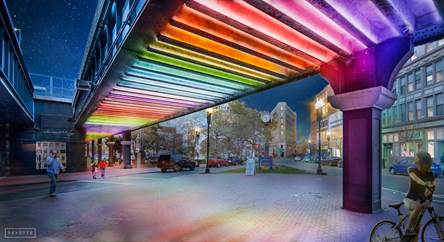 MassDevelopment and the Lynn’s Neighborhood Development Associates today announced a new campaign through the civic crowdfunding platform Patronicity and the Commonwealth Places initiative. Beyond Walls, a group of Lynn residents, business owners, and public art and placemaking enthusiasts, will use funds raised from the campaign to install lighting in underpasses and the city’s business district, a sculpture that pays homage to Lynn’s industrial roots, and seven murals in the heart of Lynn’s Transformative Development Initiative District. This project aims to improve walkability, and increase perceptions of both place and safety in the heart of downtown Lynn.

“This campaign to change the public perception of Lynn through colorful lighting, murals, and public art will illuminate the city’s rich cultural history and spur new business and economic activities,” said MassDevelopment President and CEO Marty Jones. “MassDevelopment is pleased to support this campaign, which enhances our ongoing work to revitalize downtown Lynn through the Transformative Development Initiative.”

If the campaign reaches its crowdfunding goal of $50,000 by May 22, 2017, at midnight, the project will win a matching grant with funds from MassDevelopment’s Commonwealth Places program. Learn more and donate at www.patronicity.com/Lynn.

“This project will dramatically increase the walkability, economic output, and positive perception of downtown Lynn,” said Founder and Executive Director of Beyond Walls Al Wilson. “Investing in this revitalization of Lynn’s Central Square is really the first step in bringing the city back to a position as a leader.”

Commonwealth Places is a collaborative effort from MassDevelopment and Patronicity that leverages public support for placemaking projects through crowdfunding and a matching grant from MassDevelopment. The program engages residents in the development of strategic projects in their towns and cities. The program has supported successful campaigns across the Commonwealth, from Northampton to Hyannis.  Communities, nonprofits, and other entities can learn more about these successful projects, donate to ongoing campaigns, and apply at www.massdevelopment.com/commonwealthplaces.