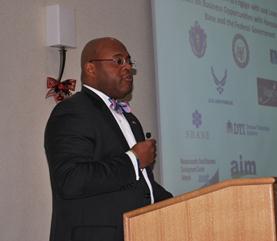 Working alongside the Patrick Administration's goals to increase access to opportunities and growth for small businesses, the U.S. Air Force is focused on increasing small business partnerships. In Massachusetts, small businesses represent 85 percent of all companies and employ more than one-fourth of the workforce. The Patrick Administration has worked to increase the competitiveness of small businesses by investing in education, innovation and infrastructure, and by streamlining state regulations to reduce extra burdens on small businesses, helping them to continue to thrive and create jobs. Today's forum served as another example of the Commonwealth's work to enhance partnerships between industry and the military, in this case specifically at Hanscom Air Force Base.

â€œHanscom Air Force Base is able to take advantage of a high-quality workforce, world-class educational institutions, and advanced technological companies in Massachusettsâ€, said Senator William â€œMoâ€ Cowan. â€œAs a Co-Chair of the Military Task Force I am pleased to be part of the effort the Patrick Administration has in partnership with Hanscom as they expand their community outreach and strengthen their communication with small businesses.â€ 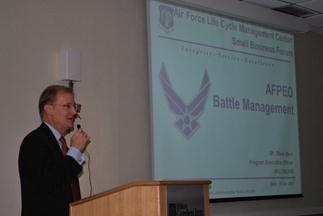 â€œAs the only Massachusetts member on the House Armed Services Committee and working in conjunction with my colleagues on the Task Force, I have seen an extraordinary opportunity to foster partnerships between our military installations and small businessesâ€, said Congresswoman Niki Tsongas (MA-3). â€œMassachusetts continues investing in and marshaling some of the best minds and resources in the world, taking advantage of our unique combination of a strong military tradition, top-notch academic institutions and innovative companies. Hanscom in particular is developing cutting edge technologies that are helping the Air Force address some of its most pressing challenges. Altogether it makes for a strong environment to grow and support small business innovation research and small business growth. I look forward to continuing my work to support these important opportunities.â€

Hanscom Air Force Base, the only active duty Air Force base in New England, is an 846-acre base located in Bedford, Lexington and Lincoln, bordering Concord. At the base, a mix of active-duty military, civilian and contractor employees develop and acquire sophisticated radar, cyber and information technology-based systems that provide critical battlefield situational awareness to U.S. warfighters. Hanscom's mission expanded last year with the Massachusetts Air and National Guard headquarters relocating their operations to the base. The Base creates more than 3,600 direct and 14,500 indirect jobs for a total of more than18,000 jobs, with a 2011 economic impact of $8.44 billion for the Commonwealth's economy.

At today's forum, staff from Hanscom Air Force Base's Office of Contracting gave a presentation entitled â€œHow to Do Business with the Air Forceâ€ and discussed ways for businesses to more easily gain information about upcoming offerings and have their questions answered. David Sikora from the Air Force Small Business Innovation Research (SBIR) program discussed his office's goals to stimulate technology research by small businesses while providing the government with cost-effective technical and scientific solutions to challenging problems.

â€œInnovation and cost-effectiveness are not the exclusive domains of a limited number of large defense contractors,â€ said Steve Wert, the Air Force's program executive officer for Battle Management, located at Hanscom. â€œWe know there are small businesses that can contribute to our mission in valued-added ways. And increasing small business participation requires us to compete more of our program content, which in turn requires us to operate with more sophisticated acquisition strategies that are inherently more cost-effective in the long run.â€

â€œThe Commonwealth's military installations contribute more than $14 billion to the Massachusetts economy,â€ said Jones. â€œWe're pleased to partner with the Patrick Administration on events like this one to show small businesses how they can connect to this important sector.â€

â€œCongratulations to the Commonwealth for bringing together the defense industry and the military to explore mutual opportunities where our smaller companies can provide innovative services and products,â€ said Paul Serotkin, President, New England Chapter of the National Defense Industrial Association (NDIA) and Senior Adviser, Venture Management, Inc. â€œNever has the time been more critical to have state government, the military and the small business community engage in keeping our national security strong, and I'm glad our state is participating in that endeavor.â€

The importance of this forum and small business partnerships was discussed at a recent visit by General Mark A. Welsh III, the Chief of Staff of the Air Force. General Welsh received briefings at Hanscom Air Force Base on the critical work being carried out here in Massachusetts and participated in a State House meeting with Governor Patrick, Senator Warren, Senator Markey, Representative Tierney and Representative Tsongas. At that meeting, they discussed the importance of the Air Force's presence to the Massachusetts economy and the Commonwealth's ongoing efforts to promote and support the Air Force in workforce development, small business partnerships, energy efficiency, master planning for secure and efficient base operations and cyber security and information technology mission enhancements. Read about the visit here: www.mass.gov/governor/pressoffice/pressreleases/2013/1108-hanscom-air-force-base.html.

About the Military Asset and Security Strategy Task Force

In 2012, Governor Patrick supported the Task Force's creation to assess each installation's military assets, infrastructure, and growth opportunities. The Task Force is co-chaired by the Governor, Representative Tsongas, and former Senator Cowan. The six military bases include Barnes Air National Guard Base in Westfield; Fort Devens; Hanscom Air Force Base; Joint Base Cape Cod; Natick Soldier Systems Center; and Westover Air Reserve Base in Chicopee. These installations account for a total economic impact of $14.2 billion and more than 46,500 Massachusetts jobs.

To learn more about the Task Force, please visit: www.mass.gov/governor/military.