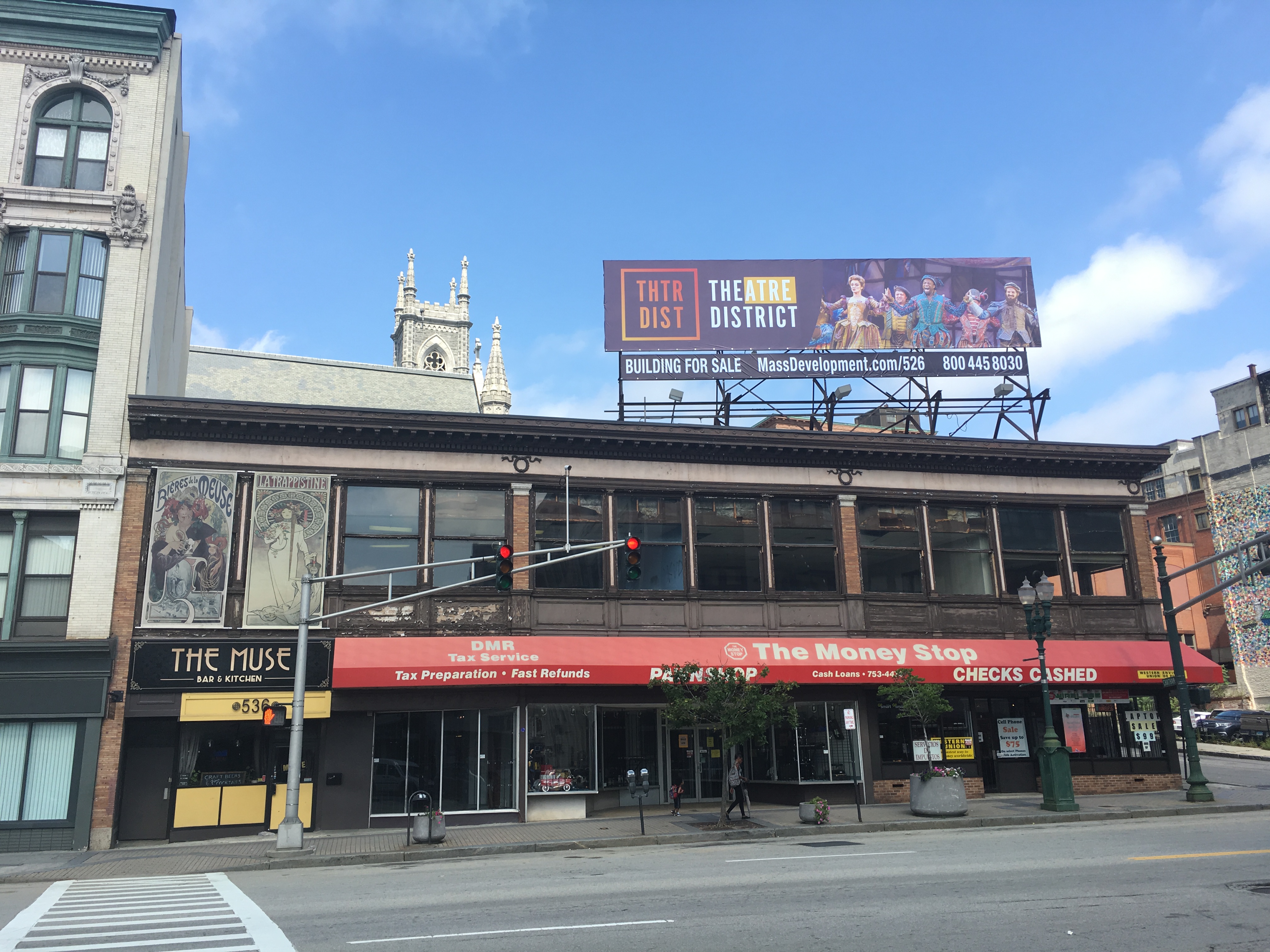 MassDevelopment has purchased 526 Main Street in Worcester, the former Pawn Shop building, through its Transformative Development Initiative (TDI) Equity Investment program. The redevelopment of this key building, located at a major intersection in Worcester’s TDI District and Theatre District, is critical to advancing the city’s vision for transforming its downtown.

“TDI Equity Investments spur transformative development, inspire private investment, and catalyze lasting growth in Gateway Cities,” said MassDevelopment Executive Vice President of Real Estate Richard Henderson. “MassDevelopment is excited to work with the City of Worcester and its TDI Partnership to support its economic vision and build on the momentum generated by investments in the city.”

Under the agreement, MassDevelopment has bought the building for $800,000 and plans to make moderate façade repairs and identify end-developers by soliciting interest through an RFP-like process. The RFP will be available in late August.

The investment builds upon the Agency’s previous investments in the city, including collaborative workspace grants to the Worcester Clean Tech Incubator and Worcester Creative Hub; Cultural Facilities Fund grants to the American Antiquarian Society and Worcester Center for Performing Arts; and a Commonwealth Places campaign recently launched for Pow! Wow! Worcester.

“Building by building, downtown Worcester is being re-imagined and reinvigorated, and I want to thank MassDevelopment for their role in this ongoing revitalization,” said City Manager Edward M. Augustus, Jr. “This project, and others being developed by private companies and our state and local partners, will help inject even more vitality to our blossoming Theater District, continuing to build density in the core of our city. These projects, combined with the upcoming $11 million redesign and reconstruction of Main Street, are what will take downtown Worcester to the next level.”

The city is one of 10 Gateway Cities selected in December 2014 as the pilot TDI Districts in Development—along with Brockton, Haverhill, Lynn, New Bedford, Peabody, Pittsfield, Revere, Springfield, and Worcester. As a part of the program, each will receive a range of real estate development services to support local visions for redevelopment, and to catalyze and leverage investments and economic activities. Everett and Malden are also receiving directed regional planning and implementation assistance to advance their Districts’ TDI visions.

“WBDC is thrilled to welcome MassDevelopment to the neighborhood! Once again, MassDevelopment has stepped in at the right time to make an investment in our community that will change the landscape of Main Street. MassDevelopment has purchased a highly visible downtown property and will position it for new ownership and new uses consistent with The Master Plan for the Theatre District,” said Worcester Business Development Corporation Vice President of Projects Roberta Brien. “WBDC looks forward to working with all partners involved in the redevelopment of this transformative building to complement the positive, ongoing revitalization taking place downtown.”

Through the TDI Equity Investment program, MassDevelopment will invest in projects that will have significant economic and district impacts; are consistent with Commonwealth and Agency priorities; engage and build capacity in local communities and partners; catalyze market demand and support district goals; are near-term projects; and lack other sufficient funding sources to proceed. The Agency made its first equity investment when it purchased 8-12 Stearns Square in Springfield in 2015. MassDevelopment is reviewing numerous projects identified by the TDI partnerships in the 10 TDI Districts in Development and is currently pursuing multiple projects for the initial tranche of limited pilot funding.

“We are completely thrilled about this purchase because we feel that the billboard and building have been holding the District back from all that we know it can be,” said Hanover Theater Director of Marketing and Public Relations Lisa Condit. “We look forward to seeing what this project will make possible in Worcester.”