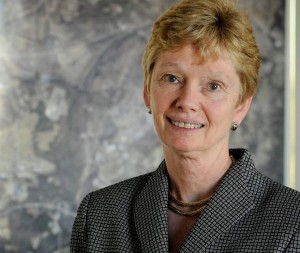 The office of Marty Jones, president and chief executive officer of the Massachusetts Development Finance Agency, is spacious, but usually empty. She doesn't spend much time there.

Ms. Jones, 59, travels frequently across the state to speak to ensure that cities, towns and businesses understand how MassDevelopment can help strengthen the economy of the commonwealth.

â€œBut beyond that,'' Ms. Jones said, â€œI listen to the people I meet with and pick up ideas as to how we can help build the community.''

In fiscal 2012, MassDevelopment invested in 280 projects, totaling more than $2.3 billion. Of that, $321 million was spent on 53 projects in Central Massachusetts.

When she speaks, Ms. Jones exudes energy and a sense of mission, attributes that define her leadership style at MassDevelopment.

The quasi-public agency recently issued $42.5 million in tax-exempt bonds on behalf of Worcester Polytechnic Institute in a public offering. Investors who purchased the bonds saved money because the bonds are exempt from federal taxes. These savings are then passed on to the borrower, WPI, with a lower interest rate. WPI plans to use the money to build a residence hall and supplementary parking lot across from Gateway Park near Lincoln Square.

Revenues are reinvested in the agency, paying for administrative costs such as salaries â€“ Ms. Jones earns $215,000 a year â€“ as well as projects that do not receive legislative funding.

â€œThink of MassDevelopment more as a bank than a grant company,'' Ms. Jones said, â€œIf people meet the criteria, then they qualify for a loan. But our goal is not to do as banks do. We finance projects that might be a little riskier.''

After a course at Brown University triggered Ms. Jones' interest in city planning, she changed her major from applied math to urban studies, and then started working for the U.S. Department of Housing and Development. First working in Washington, D.C., then in Boston, Ms. Jones took on projects such as creating local housing opportunities for low- to moderate-income families.

â€œMarty's attitude was always, â€˜How can I help the client?''' remembered Marvin Siflinger, chairman of Housing Partners Inc. and once an indirect supervisor of Ms. Jones at HUD in Boston.

In 1978, Ms. Jones took a position at Corcoran Jennison Co., a private commercial real estate firm in Boston. â€œI decided to shift from government work because it's the private sector that drives projects,'' said Ms. Jones. â€œI wanted to figure out what was making it happen.''

She seemed to figure â€œit'' out quite clearly, advancing through the ranks at Corcoran Jennison to become president and chief executive officer by 1994.

In May 2011, Ms. Jones decided to return to the public sector when MassDevelopment's board of directors unanimously voted to appoint her president and CEO. In the public sector, â€œthere are bigger issues than just deal issues,'' she said. â€œHere, we take on projects with significant public impact.''

Community development is an integral part MassDevelopment's overarching goal to strengthen the Massachusetts economy. The agency seeks to realize its objective by financing and investing in companies that are short on capital.

One of MassDevelopment's largest and longest projects is in Devens, just northeast of Worcester. It encompasses the former Fort Devens Army base, which closed in 1996. MassDevelopment is overseeing the redevelopment Devens, with the task of turning the 4,400 acres into a residential and business community.

Devens employs more than 32,000 workers across 65 businesses, and has a population of nearly 2,000 residents.

The Green Housing Project launched last summer in Devens is building sustainable housing with homes that generate as much energy as they use, at affordable costs. Today, 370 people live in redeveloped Army housing as a part of the project. MassDevelopment hopes that through leading by example, Devens can become a model for future green housing projects.

According to Ms. Jones, the manufacturing sector has changed notably over the past 20 years.

â€œIt is no longer the rough-and-tumble, greasy assembly-line work associated with manufacturing, an image your grandparents, or even parents, may carry,'' Ms. Jones said, â€œToday, manufacturing requires high-technology skill sets.''

Manufacturing presents a huge opportunity for economic growth in Massachusetts, and particularly Worcester County, which is home to large manufacturers such as Saint-Gobain, Heat Trace and Nypro Inc., all of which are hiring and in need of skilled workers.

As for being one of a handful of female CEOs in Boston, Ms. Jones said she has been fortunate.

â€œThe people throughout my career have been very supportive, and I never really had to fight against the grain. I was rewarded for my achievements.'' She paused, and then added that historically â€œgovernment positions have had a better track record of promoting women based on merit than private companies.''

While climbing the corporate ladder, she said, she â€œwas lucky that my husband didn't have to travel a lot. Now the kids are out of the nest, but for a long time we were very busy. We had several layers of backup systems, so that if the baby sitter canceled, we had a go-to neighbor to call.''

Ms. Jones' schedule is still booked full each day. She says she enjoys the bustle of her schedule but has difficulty finding time â€œto catch up on reading, and to digest and think'' about day-to-day developments.

Then again, it's all part of the appeal of the job.

â€œI like challenges; I've always liked ideas, and that's why I enjoy the work here,'' Ms. Jones said. â€œIt's not a straight path, and it makes you think.''