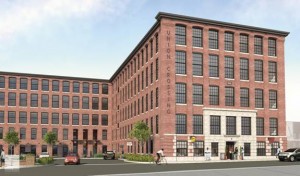 MassDevelopment has provided a $28,450 grant to Lawrence CommunityWorks to help it assess contamination at a brownfields site on the Duck Mill property in Lawrence. The $29 million redevelopment of the Duck Mill will be the second phase of Union Crossing, a new downtown Lawrence mixed-use community with new housing, commercial and open space that preserves and adapts the historic mill buildings in a National Register Historic District. The second phase will add 71 units of affordable housing and 20,000 square feet of commercial space.

“Union Crossing’s public-private partnership has made the Duck Mill a model of historic redevelopment,” said MassDevelopment President and CEO Marty Jones. “This grant lays the groundwork for the next phase of restoring this key Lawrence parcel.”

The first phase of Union Crossing, across the street from Duck Mill, is nearly complete. Tenants are moving into 60 new units of affordable housing in the $30 million development, which also has 40,000 square feet of commercial space, a large parking lot, and new playground. The mixed-use development is within walking distance of the intermodal Patricia McGovern Transportation Center. MassDevelopment also awarded $1,557,902 from the Brownfields Redevelopment Fund for site assessment and cleanup of the property in 2010 and 2011.

“MassDevelopment has been a tremendous partner on Union Crossing,” said Jessica Andors, Co-Executive Director of Lawrence CommunityWorks. “Without them, it would not have been possible to redevelop the first phase of Union Crossing, and the buildings would have continued to be neglected and underused. We are very excited that they are investing in Phase 2, a brownfield site that must be studied and cleaned up before it can be put back into use as housing and commercial space. MassDevelopment’s investment has helped create construction jobs in the first phase and put a major building back on the city’s tax rolls; we look forward to those same great results with the Duck Mill redevelopment.”

The Brownfields Redevelopment Fund, which the Massachusetts Legislature created in 1998, finances environmental site assessments and cleanup in economically distressed areas of the Commonwealth. Since the program’s inception, MassDevelopment has provided more than $60 million in loans and grants from the Fund to sites in 104 Massachusetts cities and towns. More than 200 redevelopment projects are in progress or have been completed on former brownfields sites. For more information, see our Annual Report.

MassDevelopment, the state’s finance and development agency, works with businesses, nonprofits, financial institutions, and communities to stimulate economic growth across the Commonwealth. During FY2011, MassDevelopment financed or managed more than 300 projects generating investment of $3.8 billion in the Massachusetts economy. These projects are projected to create more than 10,000 jobs (2,547 permanent and 8,129 construction), and build or rehabilitate more than 1,000 residential units.