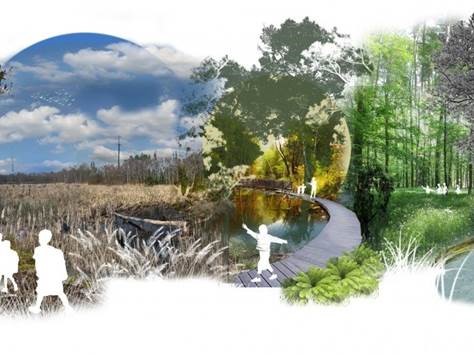 Residents of Belchertown are designing the Lake Wallace Sensory Trail with the community in mind, and the trail will provide a space for leading an active lifestyle, learning about wildlife, and meeting neighbors and friends. The Town views the trail as a crucial step toward a more walkable, safe Belchertown and prosperous town center.

“The Lake Wallace Sensory trail is a core feature and vital connector in the redevelopment of the former Belchertown State School,” said Doug Albertson, Belchertown Town Planner. “It honors the memory of the school’s residents and staff by being a fully-accessible trail and includes historical markers and areas for reflection. It also provides for the incoming senior population at the assisted living complex next to the site. Further, it enhances the educational and recreational opportunities for the nearby Chestnut Hill Recreation area and public schools. It is a crucial asset for our town and connects its past, present, and future.”

If the campaign reaches its crowdfunding goal of $28,000 by June 30 at midnight, the project will win a matching grant with funds from MassDevelopment’s Commonwealth Places program. Learn more and donate at patronicity.com/LakeWallaceSensoryTrail.