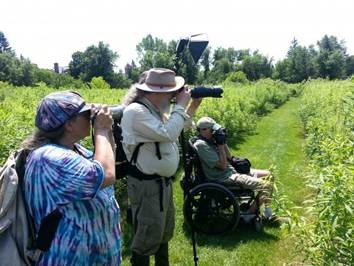 MassDevelopment and the Athol Bird and Nature Club, an active group of people sharing an appreciation of nature’s many forms, today announced a new campaign through Commonwealth Places, a collaborative initiative of MassDevelopment and the civic crowdfunding platform Patronicity. For nearly two decades, members and friends of the Athol Bird and Nature Club (ABNC) have transformed a historic schoolhouse into the Millers River Environmental Center, a vibrant space for awareness of natural history, wildlife, land conservation and the human role in our future. ABNC will use campaign funds to upgrade the accessibility of the building, improve signage, and reintroduce of “Windows on Main,” which are panels that celebrate Athol’s industrial development.

“The Millers River Environmental Center project will highlight Athol’s rich and varied industrial history, while providing increased access for patrons to experience the transformation of this historic schoolhouse,” said MassDevelopment President and CEO Lauren Liss. “We’re pleased to support this project, which will help more people learn about the area’s natural history and enjoy new uses of this renovated building.”

“Excitement is building for the accessibility project at 100 Main Street,” said Dave Small of the Athol Bird and Nature Club. “Together we can help us breathe life into this historic school and environmental Center for all to enjoy."

If the campaign reaches its crowdfunding goal of $10,000 by June 30 at midnight, the project will win a matching grant with funds from MassDevelopment’s Commonwealth Places program. Learn more and donate at patronicity.com/EnvironmentalCenter.