MassDevelopment and Malden Arts today announced a new campaign through Commonwealth Places, a collaborative initiative of MassDevelopment and the civic crowdfunding platform Patronicity, to create the Malden ARTLine. The ARTLine will be a premier public art gallery with miles of professional murals, sculptures, and community hubs. These hubs will feature bursts of art, greenscapes, pedestrian and bicycle accommodations, and gathering spaces that will fuel economic growth by creating unique and interesting places throughout Malden. Malden Arts is a volunteer nonprofit organization working to bring arts to Malden.

“This project will serve as a cultural and economic asset to Malden residents and businesses, increasing foot traffic and piquing interest in this important Gateway City,” said MassDevelopment President and CEO Lauren Liss. “We look forward to supporting the ARTLine, which will serve as a vibrant welcome for those visiting Malden.” 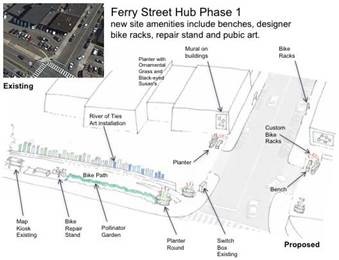 “We are thrilled to bring the ARTLine to Malden,” said Naomi Brave with the Malden Arts. “It will be a unique outdoor art gallery drawing people from all over the region to enjoy Malden's creativity, history, and economic vitality.”

If the campaign reaches its crowdfunding goal of $27,000 by June 30 at midnight, the project will win a matching grant with funds from MassDevelopment’s Commonwealth Places program. Learn more and donate at patronicity.com/ARTLine.