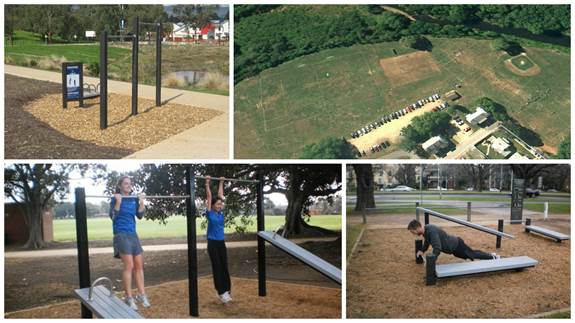 MassDevelopment, the Quabog Valley Community Development Corporation, and the Town of Palmer today announced a new campaign through the civic crowdfunding platform Patronicity and the Commonwealth Places initiative. The campaign will help the town transform an existing athletic field into a multi-purpose fitness trail featuring fitness stations and a walking path with commemorative benches. Laviolette Field Fitness Trail will increase traffic along Main Street and create a new downtown focal point by encouraging people to spend more time in the area.

“MassDevelopment is pleased to support yet another Commonwealth Places campaign—our 18th to date—and delighted with the success of the program in its efforts to renew community spaces across the state,” said MassDevelopment President and CEO Marty Jones. “The Laviolette Field Fitness Trail project will improve the physical character of the village while also encouraging more Palmer residents to visit and engage with their downtown.”

Laviolette Field is located in Three Rivers, a village in the western section of Palmer. MassDevelopment worked with the Town to create the Village of Three Rivers Revitalization Study in March 2017, the recommendations from which inspired the town to launch this Commonwealth Places campaign.

If the campaign reaches its crowdfunding goal of $14,000 by August 10, 2017, at midnight, the project will win a matching grant with funds from MassDevelopment’s Commonwealth Places program. Learn more and donate at www.Patronicity.com/Palmer.

Commonwealth Places is a collaborative effort from MassDevelopment and Patronicity that leverages public support for placemaking projects through crowdfunding and a matching grant from MassDevelopment. The program engages residents in the development of strategic projects in their towns and cities. The program has supported successful campaigns across the Commonwealth, from Northampton to Hyannis.  Communities, nonprofits, and other entities can learn more about these successful projects, donate to ongoing campaigns, and apply at www.massdevelopment.com/commonwealthplaces.