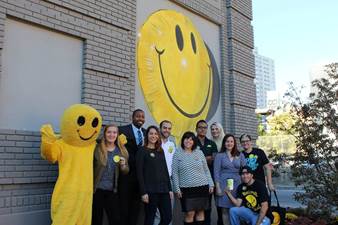 MassDevelopment and POW! WOW! Worcester today announced a new campaign through the civic crowdfunding platform Patronicity and the Commonwealth Places. The campaign will transform Elm Park Community School with 11 large-scale interior and exterior murals. The school, known for its commitment to the arts and to getting students engaged in their community, plans to partner with POW! WOW! Worcester to bring artists from across the globe in to install the murals and develop programming focused on art education.

“This campaign to change the public perception of Worcester and Elm Park Community School through colorful murals and public art will call attention to the school’s rich cultural history and spur renewed interest from the community,” said MassDevelopment Vice President of Real Estate Services Amanda Maher. “MassDevelopment is pleased to support this campaign, which enhances our ongoing work to revitalize Worcester and all of the Commonwealth’s gateway cities.”

If the campaign reaches its crowdfunding goal of $50,000 by August 25, at midnight, the project will win a matching grant with funds from MassDevelopment’s Commonwealth Places program. Learn more and donate at www.Patronicity.com/Worcester.

“Elm Park Community School welcomes and supports this community initiative,” said Worcester Schools Superintendent Maureen Binienda. “This is a wonderful opportunity for our students and their families, as well as for our faculty. We are thankful to POW! WOW! Worcester for helping put Elm Park Community School on the world stage as a vibrant destination for learning and culture.”