Devens housing project aims to break the mold on energy efficiency. But is there a market?

If you want to get a sneak peak of the house of the future, look no further than Devens.

In a few decades, if not sooner, new homes will not just be ultra-energy efficient, they’ll actually produce more power than they consume, predicts Carter Scott, owner of Transformations of Townsend, a home builder.

Scott and his team at Transformations are working to make that concept a reality, and their laboratory is in Central Massachusetts, in Devens. 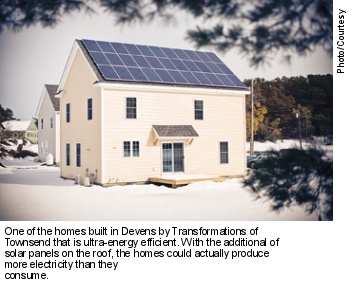 Twenty homes that are “ultra energy-efficient” – defined by a national rating system used by contractors – are being constructed in the managed community as part of a pilot program by Boston-based MassDevelopment.

MassDevelopment, which owns and manages most of the land in the former military base just off Route 2, has awarded contracts for two homebuilders to construct the energy-efficient residential units. The goal is to generate a buzz about the homes in the marketplace, which, MassDevelopment officials said, will lead to more being constructed. Most of the homes will be ultra-energy efficient and some – if the homeowner chooses – can be equipped to actually produce more power than they consume.

How do the builders do it?

Making homes ultra-energy efficient is achieved through a variety of measures. Thick insulation, triple-paned glass and ultra-efficient heating and cooling systems are standard. Beyond that, if the owner chooses, photovoltaic solar panels can be installed on the roofs to offset energy usage.

Scott’s Transformations of Townsend has already built one of the homes and three more are under construction. The firm’s contract with MassDevelopment calls for four more to be built on the site, which Scott said will happen as they're sold.

In late December, MassDevelopment broke ground on another 12-unit multi-family housing project adjacent to the Transformations’ project, which Boston-based Metric Construction will build.

“We’ve got two great companies that have a lot of experience in different arenas, including building green housing,” MassDevelopment spokesperson Kelsey Abbruzzese said. “Combine that with demand for these housing units and this is really great news.”

So while MassDevelopment officials are excited about the project, the more pressing question could be: Is there really demand for them?

The Devens housing market is small to begin with, said Victor Normand, a former MassDevelopment executive and owner of the Acton Real Estate Co.

With such a small number of homes in the community, the trends there have mirrored the state and national residential real estate markets, he said.

“There’s no question this is the product of the future,” Normand said about the green homes. But that doesn't mean consumers are willing to buy them.

Ultra-energy efficient homes can add complications to a housing sale. For example, if a solar panel project is included on a home to make it net-energy positive, that can cost extra, and may not be covered by a home loan. Scott said developers have ways of working that out, by renting the systems at no cost to the homeowner. The panels can be leased and paid for using money the panels produce by selling solar renewable energy credits, or SRECS. Power companies are forced to buy SRECS to meet state standards for supplying solar power to the market.

Homes just haven’t quite jumped on the green bandwagon, said Gerry-Lynn Darcy, vice president of marketing and business development for Metric Corp., which will be constructing the townhomes in Devens. Commercial real estate landlords seem to be pursuing green upgrades to their facilities more often, she said, because there are more immediate cost savings and economies of scale that can be produced in a commercial versus residential property.

“It just hasn’t taken off on the residential side yet, particularly in the single-family homes,” she said.

As technology continues to improve, prices will fall and there will be a migration of green technologies into the residential market.

Scott, whose construction firm specializes in green housing projects, thinks energy efficiency is catching on in the market.

“I’m as busy as I’ve ever been,” said the two-decade veteran of the housing construction industry. Many of Transformations’ projects in Boston and other areas east of Devens, are government-funded housing projects.

The biggest factor that will allow energy-efficient and net-positive homes to be accepted in the market, he said, are state and federal government incentives that allow builders to keep the costs of the homes low, making them attractive for consumers, such as the SREC programs and others.

Normand agrees that incentives are key to helping the industry migrate toward ultra-energy-efficient homes. Projects like MassDevelopment’s can help too.

“Consumers are certainly aware of high energy costs; it's on their minds,” Normand said. “MassDevelopment is providing some interest, but the real question is outside of the laboratory in Devens: ‘Will it happen?’ ”