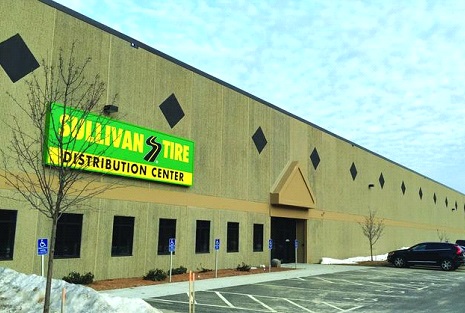 When Sullivan Tire needed to consolidate its warehouses in West Bridgewater and Brockton and build a new distribution center, it went to Maggiore Cos., a 40-year-old construction management and property development firm in Woburn that manages real estate in eight Massachusetts communities.

Sullivan Tire first tapped the developer in 2012 when it worked with Donlon and Paul Maggiore to complete a 14,000-square-foot lease in Maggiore Industrial Park on Wheeling Avenue in Woburn.

This time around Sullivan needed a newly constructed facility to house more than 100 employees, store 140,000 plus tires and become the company’s main distribution center for the Northeast.

Paul Maggiore, CEO of Maggiore Cos., agreed to take on the project from conception to construction and negotiated the 10-year lease at 151 Charles F. Colton Road in the Myles Standish Industrial Park in Taunton. Maggiore also negotiated the purchase of more than 15 acres from Taunton Development Corp. and Mass. Development Corp. with NAI Hunneman, the sellers’ representative. The $9.5 million construction loan was provided by Bank of New England.

“Based on the cordial relationship that we had we were given a great opportunity to put a deal together on the Taunton project,” said Matt Maggiore, the company’s president. “Having that tenant recognition is something we are proud of and the pace at which we were able to permit the project, negotiate the deal, construct it and get it into service, makes us even prouder.”

Construction on the building began in May and was completed in October, but it would have been completed sooner if the lead time on the precast panels was shortened, Maggiore said. Typically, it takes Maggiore only four months to construct a 100,000-square-foot shell.