Some Offshored Manufacturing Jobs Return to US 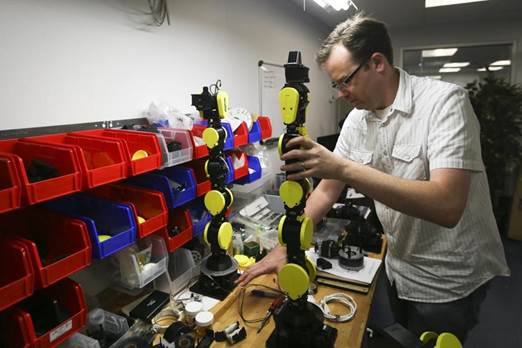 Four years after moving manufacturing to India in 2008, Cambridge robotics maker Energid Technologies Corp. brought production and a handful of jobs back to Massachusetts, squeezed by rising tariffs on parts imported to its Bangalore factory and frustrated by the unpredictable Indian bureaucracy and difficulties shipping its industrial robots to US markets.

Today, with robotics sales climbing, the company plans to ramp up production. But rather than looking to China, which conventional thinking would suggest, Energid is strongly considering expanding at its facility in Burlington.

“We can really do it from New England,” said David Askey, one of the owners. “The thinking has flipped, from being ‘You must manufacture in China’ to ‘You have the right infrastructure in place here’. ”

Energid is among some 350 US companies that have brought nearly 40,000 manufacturing jobs back to the United States from overseas over the past five years, as costs in emerging economies like China and India rise, automation makes production here more competitive, and the complexity of today’s products require closer collaboration between designers, engineers, and production lines.

The jobs returned from foreign locations — known as “reshoring” — represent a tiny portion of manufacturing employment, but economists say they are a sign of the sector’s rebound following the last recession. Since the sector hit bottom in early 2010, the nation has added nearly 900,000 manufacturing jobs, according to the Labor Department.

About 3,000 manufacturing jobs have returned from offshore to the Northeast in the past five years, including 600 to Massachusetts, according to the Reshoring Initiative, a group that promotes US manufacturing. The higher costs of doing business in Massachusetts can work against the state, said Harry Moser, the group’s founder, but reshoring here is still attractive to some companies because of the skilled workforce and proximity to colleges and universities.

“A portion of the work will be driven to states like Massachusetts due to the need for the skills and the innovative benefits of being close to MIT and all that intellectual, scientific, engineering horsepower that’s up there,” Moser said. “Those advantages continue.”

Part of the reason Energid may keep its production here is that it needs two kinds of highly skilled employees — engineers and machinists, said Askey. The company, which employs about 25, sells hundreds of industrial robots a year, producing them in a 2,000-square-foot space in a Burlington office park.

Half of the workplace looks like an auto body shop for robots, with shelves of plastic and metal parts, rows of robotic arms, and lines of precision machining tools and equipment. The other half looks like a software startup, with engineers sitting at computers writing code and designing robotic arms that can intuitively avoid collisions. All employees are within shouting distance of one another. 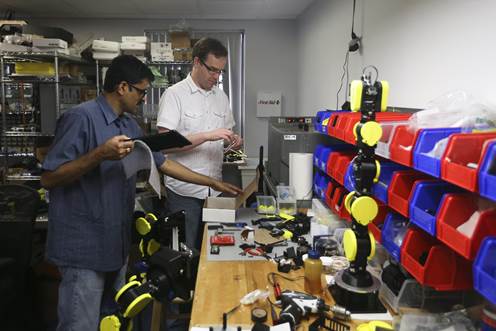 Many modern manufacturing companies need to have engineers and designers close to production lines because of the complexity of products and the need to update them frequently to keep up with, or ahead of, increasingly fierce and global competition, said Barry Bluestone, professor of political economy and founding director of the Dukakis Center for Urban and Regional Policy at Northeastern University.

Technological innovations have automated jobs, cutting labor costs while increasing productivity and making many US manufacturers competitive with companies in developing countries that pay workers less. Such advances, coupled with rising wages in places like China, mean companies can economically manufacture closer to US markets.

To take advantage of this trend, Massachusetts must tackle a particular challenge, Bluestone added. The state faces a labor shortage in manufacturing as baby boomers retire and fewer younger workers move into those careers. That shortage — estimated by Bluestone to be as many as 100,000 jobs by 2022 — needs to be addressed if the state plans to keep its manufacturing base alive.

“Two hundred fifty thousand jobs is nothing to sneeze at,” said Bluestone, referring to manufacturing employment in Massachusetts. “There’s a good-news manufacturing story, and reshoring has a part to play.”

MassDevelopment, the state’s quasi-public industrial development agency, has helped several companies reshore, including AO Eyewear Inc. of Southbridge, which sells aviator glasses. A year ago the company received a $1.5 million loan from MassDevelopment to buy equipment to make the sunglasses in Massachusetts instead of China.

MassDevelopment executive director Marty Jones said the agency also helped Dunn & Co., a commercial printer in Clinton, finance expansions here instead of abroad. Executives at the family-owned company, which makes calendars sold in kiosks at malls, went to the Chinese factory where their calendars were produced, and realized could do the same thing with fewer people and lower costs in Massachusetts.

They reshored the manufacturing to Massachusetts four years ago, creating nearly a dozen jobs while increasing sales and profits, said David Dunn, the company chairman.

“You can produce more out of the same workers,” said Dunn, 72. “They work smarter, not harder.”

Jones said both companies are enjoying the advantage of being closer to their products and markets. She said she expects reshoring to continue as other specialty and precision manufacturers are drawn by the state’s technical talent, skilled workers, and innovative culture.

“With the nature of our manufacturing base, workforce, and cost structure, we are not likely to get back major washing machine manufacturers, not car manufacturers,” Jones said. “But we will get back niche things, and there’s still great interest in the benefits of doing that.”