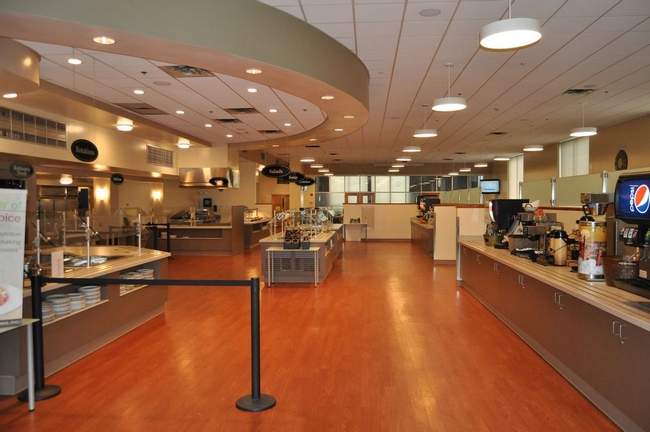 QUINCY – Students at Eastern Nazarene College returned to a renovated cafeteria Wednesday, one of the several upgrades on the campus resulting from financing made possible through MassDevelopment.

MassDevelopment, more formally known as the Massachusetts Development Financing Agency, arranged a $23 million tax-exempt bond. The $23 million the college borrowed through that bond will go toward various campus improvements and renovations, including upgrading its academic and athletic facilities. The bond is also being used to refinance existing debt.

“The school had some existing bonds, and because rates were so low, even if we didn’t take some money for these other projects, we would have went ahead and refinanced our bonds,” said Scott Turcott, vice president for institutional advancement.

The cafeteria was completely renovated over the summer, from the ceiling to the floor, with a new paint scheme, furniture and serving equipment. The renovations, which include booths, flat-screen televisions, high-top tables and new carpet, were the first major changes to the cafeteria in 18 years.

“The things we have already done have been a tremendous improvement to campus life,” Turcott said. “(The cafeteria) is beautiful. It looks like we're in the 21st century.”

Turcott said he hopes fundraising and help from the bond money will allow the school to complete more projects.

“If we’re as successful as we think we can be with raising money, and with what we will have from refinancing, we will be able to do two projects, not one,” he said.

Part of the bond will be used for athletic field upgrades. The school is hoping to add a turf field to replace the current grass soccer field. Turcott said the school is also looking at possible improvements at its secondary campus on Old Colony Avenue.

“We’re just at the drawing board phase now,” he said. “We’re looking at how we might better utilize space at Old Colony.”

The bond issued by MassDevelopment was purchased by East Boston Savings Bank.