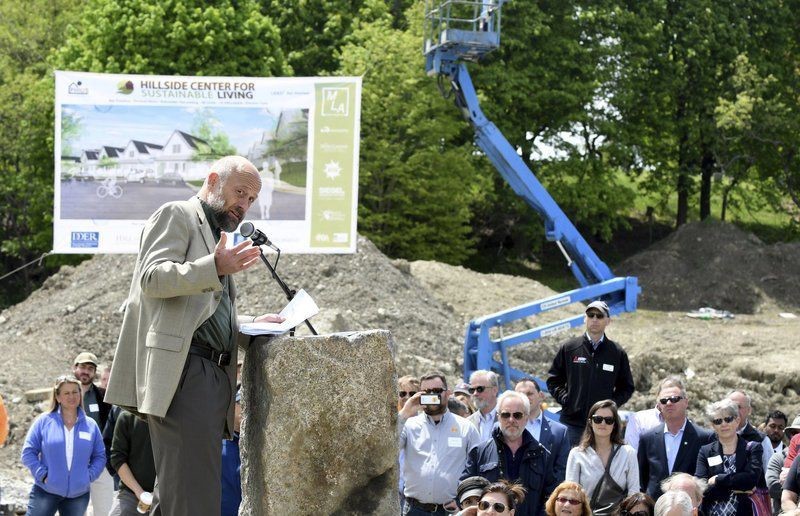 In a toxic wasteland, David Hall envisioned promise and progress.

City and state officials celebrated the groundbreaking Friday morning of Hillside Center for Sustainable Living, a first-of-its-kind urban agriculture-focused, solar-powered community, in an effort to combine an energy efficient lifestyle with affordable housing — something the city has been desperately seeking.

The 48 units will be split up into seven “main buildings” including one, two and three bedroom homes. There will also be a common building which contains guest rooms for people who may want to downsize or who need additional space. In some buildings — the Cottage Extension, for example — there are four townhouses which make up one building, Hall said.

The common house will also provide composting toilets, a gathering space and a commercial kitchen.

In 2010, the four-acre site was purchased with little ecological potential, city officials noted. More than 300,000 yards of contaminated topsoil and coal ash, among other harmful debris, was left sitting atop a small section of the space, located on Cottage Court.

“It was just a massive junkyard forever,” Mayor Donna Holaday said at Friday’s groundbreaking. “David having the vision to see that he could turn the site into something as incredible as this sustainability community, it was very exciting.”

With a $400,000 loan from MassDevelopment, Hall was able to develop a community that produces more energy than it consumes. Hillside’s mission began with target testing the three largest emitters of carbon dioxide — housing, food and transportation — accomplished through a 460kW solar array, advanced green building, on-site growing and food production, and shared electric vehicles, he said.

The staff developed a concrete tilt-up wall system that achieves Passive House and Leadership in Energy and Environmental Design platinum certifications. On the coldest night of winter, designers predicted it will require the energy equivalent of a blow dryer to heat one, two-bedroom home, Hall said.

In an effort to reuse and recycle materials, more than 2.5 million pounds of granite were salvaged from the Whittier Bridge reconstruction project to build retaining walls, officials noted.

In a walk-thru of the site, project officials noted residents will have diverse opportunities to grow and work with local food. Each resident has the opportunity to participate in a community support agriculture farm share, garden in their rooftop planters, or sign up for a community garden plot, Hall said.

Walking through the property, residents will be surrounded by an edible landscape which promotes healthy soil, biodiversity, native species, natural pest management and food growth. There is also a 1,500-square-foot greenhouse planned for the site.

State Sen. Kathleen O’Connor Ives, D-Newburyport, noted that this design plan for sustainable living could be used as a model for other communities across the state and region.

In addition to making a commitment to sustainable living, Hall said the housing project will provide one building, in partnership with the Newburyport YWCA, to provide local affordable housing, which the city has been grappling with in recent months.

“As a member of the environmental committee at the Statehouse, we’re constantly reviewing bills and looking for new ways to increase sustainable living,” said Rep. James Kelcourse, R-Amesbury. “Our office deals a lot with housing requests, so not only do we need to make sustainable products and sustainable living spaces and to recycle and reuse more, but we also need to open up new ways to look at housing opportunities for people.”

“Part of the mission of the YWCA is to promote justice and often we hear of environmental injustice,” said John Feehan, executive director of the YWCA. “The vision of David Hall ... incorporating an opportunity for low income individuals to participate and experience the benefit of this new form of housing...he went beyond just offering an opportunity.”

Hall and Moskow, the developer of Hillside, worked with their long-time partners Moskow Linn Architects, a firm based in Boston, to design a home that combines farmers’ porches, townhouses, gardens and solar panels. The project is estimated to take two years to complete. Hall previously brought green energy on a large scale to Newburyport with the development of the Tannery Marketplace on Water Street.

“I think it’s the obligation of community members who have the ability to create this,” Hall said. “If you’re not part of the solution, you’re part of the problem.”