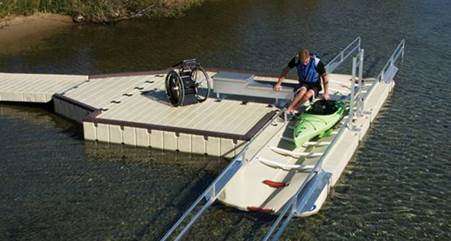 MassDevelopment and the Town of Athol today announced a new campaign through the civic crowdfunding platform Patronicity and the Commonwealth Places initiative. The Town of Athol is joining with the Millers River Watershed Council and the Friends of the Alan E. Rich Environmental Park to buy and install an accessible canoe and kayak dock on the Millers River in Athol. The campaign will also help finance new seating, a short-term kayak storage rack, and signage to direct kayakers to destinations along the river.

“The Commonwealth’s ‘blue economy’ and other environmental resources provide residents with terrific recreational activities and make Massachusetts a destination for thousands of visitors each year,” said MassDevelopment President and CEO Marty Jones. “We are glad to support a project that leverages this important resource and improves access to the beautiful Millers River Blue Trail.”

The dock in Athol will complement an existing dock in Orange, which will improve access to the six-mile Millers River Blue Trail that connects Orange and Athol. With a short paddle down the river, residents and visitors can access each community’s downtown restaurants, breweries, and other businesses.

“This campaign will help provide dock safety railings, benches, short term boat storage, and other enhancements for the accessible dock and park area,” said Eric Smith, Director of Planning and Development for the Town of Athol. “We’re thrilled to partner with the Friends of Alan B. Rich Environmental Park and the Commonwealth Places Initiative on this campaign.”

If the campaign reaches its crowdfunding goal of $5,000 by April 20, 2017, at midnight, the project will win a matching grant with funds from MassDevelopment’s Commonwealth Places program. Learn more and donate at www.patronicity.com/athol.

“This accessible dock will provide people with physical challenges canoe and kayak access to the Millers River Blue Trail, where they can spend time paddling, enjoying nature, fishing, and learning the history of the river,” said Tom Rich of Friends of the Alan B. Rich Environmental Park. “Improving access to this six-mile trail will help connect downtown Orange to downtown Athol, providing residents of these two towns with endless opportunities for recreational activities on and around the water.”

Commonwealth Places is a collaborative effort from MassDevelopment and Patronicity that leverages public support for placemaking projects through crowdfunding and a matching grant from MassDevelopment. The program engages residents in the development of strategic projects in their towns and cities. The program has supported successful campaigns across the Commonwealth, from Northampton to Hyannis. Communities, nonprofits and other entities can learn more about these successful projects, donate to ongoing campaigns, and apply at www.massdevelopment.com/commonwealthplaces.