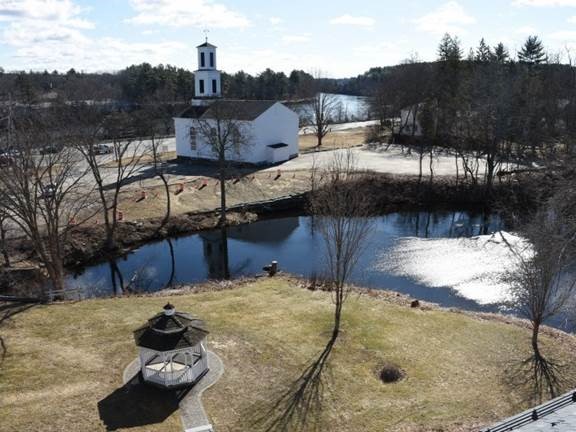 MassDevelopment and the civic crowdfunding platform Patronicity have launched a new Commonwealth Places campaign with the Town of Tyngsborough for a walking trail and community gathering space. This pedestrian-friendly linear park will be on the waterfront area behind the First Parish Meeting House, near the heart of Tyngsborough. The waterfront behind the meetinghouse is overgrown and underused, and this campaign aims to reclaim the area and make it an asset for the community. Creating a natural pathway to stroll along the waterfront and installing picnic tables, benches, and light posts will allow Tyngsborough residents and visitors to enjoy the beautiful views along the banks of Lower Flint Pond.

“The Town of Tyngsborough’s vision for this waterfront park will help unlock the area’s potential and create myriad opportunities for community gathering,” said MassDevelopment President and CEO Lauren Liss. “We look forward to supporting the Town’s efforts in making this dream a reality.”

If the campaign reaches its crowdfunding goal of $12,500 by June 1 at midnight, the project will win a matching grant with funds from MassDevelopment’s Commonwealth Places program. Learn more and donate at patronicity.com/FirstParishFootpath.

"The people of Tyngsborough have always been committed to the idea of a vibrant Town Center,” said Justin Sultzbach, Assistant Town Administrator. “Through this partnership with MassDevelopment and the help of generous donors and volunteers, the Footpath at First Parish Meeting House is helping us renew that commitment.”