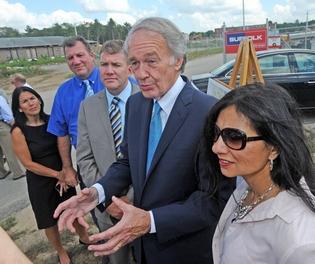 TAUNTON — U.S. Sen. Ed Markey, D-Mass, visited Taunton on Thursday to discuss economic development, restoring the arson-damaged City Hall and responding to the opioid epidemic that has claimed so many lives in the community.

Markey expressed amazement at the ongoing development at the industrial park, as the former Dever State School campus is being demolished and built over with a proposed life sciences park on 32 acres of developable land. The development of Dever Drive is expected to be completed by next June, MassDevelopment officials said.

The senator said he was impressed that 1.6 million square feet of new private-sector commercial development will be added to the Taunton industrial park as a result of the ongoing expansion.

“That would be like adding two Prudential buildings to Taunton’s tax base,” said Markey, joined by Hoye and other local representatives. “And it’s all going to happen in just a very brief period of time. It’s very exciting. But it took federal transportation money, economic development money, state transportation money, state development money and a very visionary city … to get this to this point.”

Markey stood on Colton Road, overlooking the shell of the new Martignetti liquor distribution facility that is being built at a rapid pace since breaking ground this summer. The company, lured to Taunton through a tax increment financing agreement that will save it $5.1 million over 20 years, is set to complete the 680,000-square-foot facility next July.

Marty Jones, president and CEO of MassDevelopment, told Markey that matching federal and state funds were critical to pay for road construction for the new stages of development at the Myles Standish Industrial Park. Mike Mitchell, MassDevelopment vice president of planning and development, said that other than the 32 new acres that are being developed, there is only one 4-acre site currently available in the industrial park due to high demand.

“Everything else is sold out,” Mitchell said.

The new phase of development of Myles Standish Industrial Park will also feature a Life Sciences Training and Education Center, said state Sen. Marc Pacheco, D-Taunton, a proponent of the park who worked to get the proposed $5 million facility included in the 2008 life sciences bond bill, according to a representative from his office. The training center would go in the place of the old Dever main office building, Mitchell said.

Markey called the development project a “perfect example” of a public-private partnership, including federal, state and local government.

Also during his visit, Markey said he hopes to offer federal assistance to Taunton to restore the historic City Hall building, which was damaged in a 2010 arson fire and has been out of commission since. One of Markey’s aides suggested that U.S. Economic Development Agency may be able to provide assistance for technology associated with the building.

“(We discussed) using the old façade, but kind of creating a new City Hall downtown, and potentially partnerships we might be able to create with the federal government to help telescope the time frame, to help see that to successful completion,” Markey said. “That was a very exciting part of the day.”
Hoye said that getting City Hall reopened downtown is a priority, and thanked Markey and the rest of the Massachusetts delegation in Washington for assistance on the project.

“They are going to scour, as they said, to see if there is anyway they can assist us,” Hoye said.

Markey said he was also able to continue the dialogue about the opioid crisis that has affected Taunton and the rest of the state, killing 14 people in Taunton from suspected heroin overdoses last year and eight so far this year.

“It’s pretty clear, and the mayor says this to me, that you can’t arrest your way out of this problem,” Markey said. “We are going to have to have much stronger prevention and treatment programs put in place.”

Markey credited Taunton and its city leadership for getting out front and upfront on the opioid epidemic.

“We’ve been a long way since then, but we have a long way to go,” Markey said. “Taunton was at the beginning of this national conversation, and I thank the city leadership and the mayor for allowing me to bring the national officials right here to Taunton, because I think it really has triggered a real change in attitude about the opioid epidemic.”

Hoye agreed that there is now a change in attitude about the seriousness of the opioid crisis, with President Barack Obama addressing the issue this year after being “somewhat silent” about the topic.

Markey also acknowledged that the nation’s problem with the over-prescription of painkillers is an underlying factor in the opioid crisis.

“America is only 4 percent of the world’s population, but we are 80 percent in pain prescription medicine in the world,” Markey said. “The pathway in is typically through prescription drugs. There is an over-prescription crisis in America.”

Markey said the solution to the pharmaceutical issue is to engage the medical community, citing a proposed law that he introduced to mandate training for all physicians and medical personnel prescribing painkilling drugs.

Hoye said that he was glad Markey was able to see the ongoing development at the Myles Standish Industrial Park, which, according to the Taunton Development Corporation, has around 100 companies with around 7,500 employees.

“Great things are happening in the city of Taunton,” Hoye said. “It’s great to talk about and highlight those things.”