What's the future of downtown Brockton? These properties are key for redevelopment 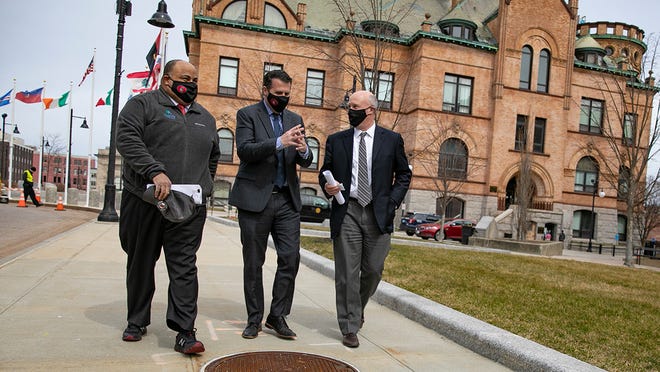 BROCKTON — Mayor Robert Sullivan was gleaming with excitement as he was surrounded by city and state officials, bringing them on a tour of the city and talking about new economic developments in the downtown area.

"With three commuter rail stops in the heart of Brockton, millions in federal and state infrastructure aid secured, and more than 500 units of new transit-oriented housing in the pipeline, Brockton is buzzing," Sullivan said Wednesday afternoon. "The future for the City of Champions is bright as we join together to recover and rebuild from the COVID-19 pandemic.”

City and state public officials — masked and often physically distanced — went on a walking tour of downtown Brockton to view the progress and plans for underdeveloped properties in Brockton.

The tour began at City Hall, featuring Secretary of Housing and Economic Development Mike Kennealy, members of MassDevelopment, state representatives, representatives from Sullivan's office and the mayor himself.

“There’s no better mechanism for understanding Brockton’s ongoing transformation and the impact of recent state investments than a walking tour with the legislators and local officials who know this city best,” said MassDevelopment President and CEO Dan Rivera, the former Lawrence mayor, who joined the tour.

The tour began at the Corcoran building on 308 Montello St., a long-vacant, city-owned commercial property that will be renovated using a $250,000 MassDevelopment recoverable brownfields grant, according to Kerry Richards, the mayor's chief of staff.

The tour then proceeded to Sycamore Grove at 226 Main St., which was a bus terminal, but now serves as a city parking lot. Using a $165,000 shared streets grant, the city will attempt to make to make permanent improvements that support outdoor dining and temporary improvements to support pop-up entertainment and community events, Richards said.

There were 10 total sites on the tour, including Stadelman Block on Frederick Douglass Avenue, which is likely to be the site of the combined public safety facility that will be be built by 2023.

Those on the tour also saw the future home of Brockton Beer Co., a MassDevelopment-financed project at 121 Main St., the former home of Kresge's.

The tour also featured the Trinity Financial’s Enterprise Block Phase II and the redevelopment site and the four redevelopment parcels created by New Roads, an environmental service contractor based in Brockton. The construction site is set to become a mixed-income residential unit capable of hosting 113 units along Petronelli Way.

"Brockton is grateful for the state, federal and private investment in our downtown and we must strengthen these partnerships for near-future investments on the East Side, from Shaw’s Plaza to Brockton Hospital," state Rep. Michelle Dubois, a Brockton Democrat, said after the tour.