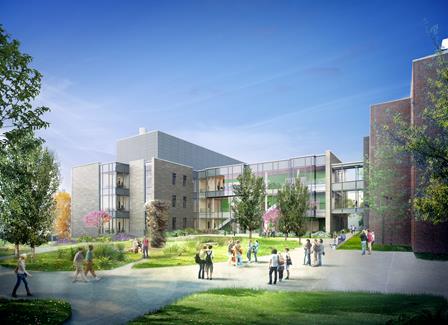 MassDevelopment has issued two tax-exempt bonds totaling $104,645,000 on behalf of the President and Trustees of Williams College, a liberal arts college in Williamstown. The college is using bond proceeds to demolish an existing science center; build, furnish and equip two new science buildings, a 77,000-square-foot building and a 101,000-square-foot building, which will include lab spaces, faculty offices and classrooms; and renovate two existing science buildings, the Morley Scientific Laboratory and Thompson Physical Library. Williams will also use proceeds to build out its Schow Science Library and to refinance past debt.

“The science center at Williams College will offer students a breadth of resources in STEM learning, from state-of-the-art research labs to an expanded science library,” said MassDevelopment president and CEO Marty Jones. “We are pleased to support the College and other exceptional higher education institutions across the Commonwealth as they improve and expand their campuses.”

Established in 1793, Williams is a private, coeducational, liberal arts college with graduate programs in the history of art and in development economics. There are three academic divisions (languages and the arts, social sciences, and science and mathematics), 25 departments, 35 majors, and concentrations and special programs. Williams is consistently ranked among the top liberal arts colleges in the nation, and its faculty is noted for the quality of its undergraduate teaching. Virtually all faculty members engage in research activities that complement their commitment to teaching, and encourage active participation of students in that research.

“We're grateful to MassDevelopment for enabling the construction of our new science center,” said Fred Puddester, Vice President for Finance and Administration at Williams College. “With this investment, Williams will build upon a long history of excellence and secure its place for decades to come as a leading institution for the teaching of science.”