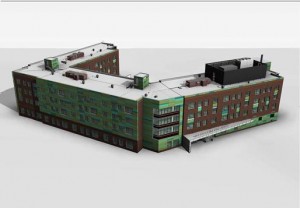 MassDevelopment has issued $42,540,000 in tax-exempt bonds on behalf of Worcester Polytechnic Institute (WPI), which plans to use bond proceeds to build a 250-bed apartment-style residence hall in the City's downtown. The 89,000-square-foot residence hall will be across from Worcester's Gateway Park, the Institute's growing center of research, innovation, and commerce. Bond proceeds will also finance construction of a surface parking lot.

“Over the past seven years, WPI has grown its Life Sciences programs significantly. The location of this residence hall near Gateway Park, a life sciences hub that the university has been developing within Worcester, makes sense for students,” said MassDevelopment President and CEO Marty Jones. “Through this low-cost financing, MassDevelopment is pleased to continue our support for WPI, Gateway Park, and the City of Worcester.”

Originally developed as a joint venture with the Worcester Business Development Corporation (WBDC), WPI became the sole owner of Gateway Park in 2010 and is pursuing the build-out of the park in partnership with companies ready to invest in the region. The master-planned, 12-acre park, located in downtown Worcester, envisions five buildings totaling 500,000 square feet of flexible laboratory and office space for a range of research and commercial activities. The flagship complex at Gateway Park is WPI’s 125,000 square-foot Life Sciences and Bioengineering Center, which opened in 2007 and is fully occupied with graduate research laboratories, life science companies, state-of-the-art core facilities, and WPI's Corporate and Professional Education division.

MassDevelopment previously helped finance a sports and recreation center on WPI’s main campus, along with projects at 50 Prescott Street and Massachusetts Biomedical Initiatives in Gateway Park.

“I want to thank MassDevelopment for its support in helping further WPI’s capital plans on campus and at Gateway Park,” said WPI Executive Vice President and CFO Jeffrey Solomon. “WPI’s sound financial position and this access to tax-exempt bonds allow us to make strategic investments that improve both our institution and the city of Worcester.”

About Worcester Polytechnic Institute
Founded in 1865 in Worcester, Mass., WPI is one of the nation’s first engineering and technology universities. Its 14 academic departments offer more than 50 undergraduate and graduate degree programs in science, engineering, technology, business, the social sciences, and the humanities and arts, leading to bachelor’s, master’s and doctoral degrees. WPI’s talented faculty work with students on interdisciplinary research that seeks solutions to important and socially relevant problems in fields as diverse as the life sciences and bioengineering, energy, information security, materials processing, and robotics. Students also have the opportunity to make a difference to communities and organizations around the world through the university’s innovative Global Perspective Program. There are more than 30 WPI project centers throughout North America and Central America, Africa, Australia, Asia, and Europe.

About MassDevelopment
MassDevelopment, the state’s finance and development agency, works with businesses, nonprofits, financial institutions, and communities to stimulate economic growth across the Commonwealth. During FY2011, MassDevelopment financed or managed more than 300 projects generating investment of $3.8 billion in the Massachusetts economy. These projects are projected to create more than 10,000 jobs (2,547 permanent and 8,129 construction), and build or rehabilitate more than 1,000 residential units.