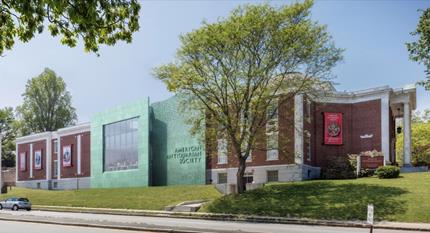 MassDevelopment has issued a $17,705,600 tax-exempt bond on behalf of the American Antiquarian Society (AAS), a scholarly society and independent research library in Worcester. The AAS is using bond proceeds to expand and upgrade its facilities by buying a property at 4 Regent Street in Worcester for office, meeting, and storage space; demolishing existing structures and making improvements at 90 Park Avenue for parking; and reconfiguring its existing facility at 185 Salisbury Street by relocating its conservation laboratory, HVAC systems, and other service equipment while creating new seminar, meeting, and exhibition areas. The AAS is also using bond proceeds to refinance past debt, and United Bank purchased the bond.

“The AAS preserves some of the most significant artifacts and printed material from American history, from tea from the Boston Tea Party to the preeminent collection of the works of James Fenimore Cooper,” said MassDevelopment President and CEO Marty Jones. “The organization provides Massachusetts residents with an incredible cultural resource, and we are pleased this bond will help AAS update its facilities and better serve visitors to New England’s second-largest city today and in the future.”

The American Antiquarian Society, a scholarly society and a major independent research library, was founded by the Revolutionary War-era newspaper publisher Isaiah Thomas in 1812. The AAS library houses the United States’ largest and most accessible collection of printed cultural materials dating from the colonial period through 1876. The organization also curates manuscripts and a substantial collection of secondary texts, bibliographies, digital resources, and reference works related to all aspects of American history and culture before the 20th century.

“With the help of MassDevelopment, we can update and expand our main library building and ensure that we continue to preserve and share the nation’s many diverse stories with the American people,” said AAS President Ellen S. Dunlap.