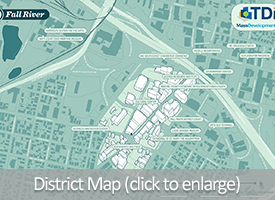 Situated in the heart of downtown, the Fall River TDI District connects the city’s art district to its newly developed waterfront. As an increasingly active and engaging area that’s seeing new development and investment, Fall River’s TDI District has historical and cultural significance as a booming regional powerhouse in Massachusetts’s South Shore. The TDI Partnership aims to leverage the district’s role as a connector between the city’s north and south ends by increasing market-rate housing and walkability, and by building relationships with the community and local stakeholders to form a distinct district identity: a destination in which people can visit and stay downtown. Primarily a commercial and mixed-use corridor, the district has many assets that, when leveraged, can increase positive perceptions of Fall River. Through active engagement and support from stakeholders throughout the city, an active nightlife hub, and events that incorporate arts, culture, and entertainment to attract an array of locals and visitors, can become the standard in downtown Fall River. Anchor institutions around downtown include the Bristol County Superior Court, the Lizzie Borden B&B, and Alexandra’s Boutique.