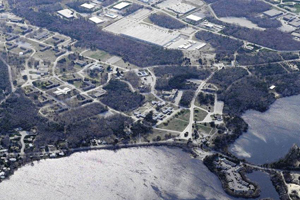 In 2002, when the Commonwealth shuttered the final active portions of the Paul A. Dever State School in Taunton, the 220-acre development looked like it would go the way of many other contaminated, decaying, and abandoned institutional sites. Reacting quickly to the school’s closing, state Senator Marc Pacheco and a delegation of local lawmakers provided legislation for the site to be redeveloped as an expansion of the existing Myles Standish Industrial Park that had already contributed so much to the region’s economy. The legislation also called for a 50-acre Life Sciences Business & Technology Park that would feature a new state-of-the-art Life Science Training & Education Center.

Unfortunately, the site had a negative land value due to the amount of demolition, remediation, and new infrastructure required. Unable to attract any private development, the site sat vacant for many years, increasing the rate of decay and liability of the campus. In 2011, MassDevelopment and the Taunton Development Corporation (TDC) together formed a 501(c)(3) non-profit corporation, the Taunton Development/MassDevelopment Corporation (TD/MDC), to realize the full potential of a beautiful site that was once considered as a location for the headquarters of the United Nations.

Thanks to convenient access to Interstate-495 and an ideal location between Boston, Worcester, and Providence, the Myles Standish Industrial Park Expansion will continue the storied success of the current industrial park, where 100 companies employ more than 7,400 people. The expansion will create 1.9 million square feet of development, two thousand jobs, and more than $2 million in property and vehicle excise taxes for the City of Taunton.

The Myles Standish Industrial Park Expansion will ensure the region’s ability to offer expansion opportunities for burgeoning industries for years to come.