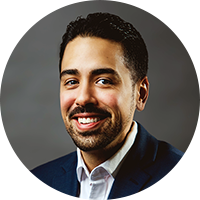 Marcos comes to MassDevelopment from the City of Holyoke, Massachusetts, where he served for almost nine years as director of planning and economic development and deployed the largest urban renewal plan in Massachusetts. In the role, he planned, permitted, capitalized, and/or oversaw construction of public and private development projects worth well over $100 million, leading to renewed economic growth in the city. Previously, Marcos has served on Governor Baker’s Economic Development Planning Committee twice, the New York City Economic Development Corporation, the Pioneer Valley Planning Commission, the Puerto Rico Industrial Development Corporation, and the Governor’s Office in Puerto Rico.

Marcos holds a dual master’s in Public Affairs and Urban & Regional Planning from the Princeton University School of Public and International Affairs, and a bachelor’s in Economics and Political Science from the University of Puerto Rico in Río Piedras.

Marcos resides with his wife and two young boys in Holyoke, Massachusetts. He volunteers his time, among other things, as a national board member for the EforAll entrepreneurship program based in Lowell, Massachusetts and for Pregones/Puerto Rican Travelling Theater based in the Bronx, New York.