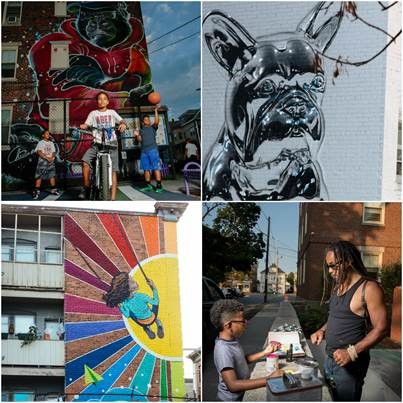 MassDevelopment and the North Shore Community Development Coalition (CDC), a regional nonprofit that supports low-income and distressed neighborhoods in Salem, Peabody, and Beverly, today announced a new campaign for Salem’s Punto Urban Art Museum through the civic crowdfunding platform Patronicity and the Commonwealth Places initiative. The Punto Urban Art Museum is a mission-driven, open-air, public art program encompassing a three-block area of the Point neighborhood in Salem, where visitors can experience public murals free of charge. The museum, created to break down the divide between the Point and the rest of the community, will use this campaign to fund events and workshops such as a community block party and educational tours, and improve infrastructure by installing lighting, painting alleys, improving pedestrian access, and activating empty spaces throughout the Point.

“In Salem, Punto Urban Art Museum is using public art and placemaking to catalyze revitalization and strengthen engagement in the city’s vibrant Point neighborhood,” said MassDevelopment President and CEO Lauren Liss. “We are pleased to invest in the future of this dynamic community through the Commonwealth Places program.”

If the campaign reaches its crowdfunding goal of $50,000 by June 8, 2018, at midnight, the project will win a matching grant with funds from MassDevelopment’s Commonwealth Places program. Learn more and donate at patronicity.com/Puntourbanartmuseum.

“We want to create an experience that will be accessible to residents of The Point neighborhood and to the thousands of visitors Salem welcomes each year," said Mickey Northcutt, Executive Director of the North Shore Community Development Coalition. “This campaign will help us install more murals, lighting exhibitions, sculptures, and allow us to make some infrastructure upgrades that will really improve the visitor experience.”